Filming in the Four Corners 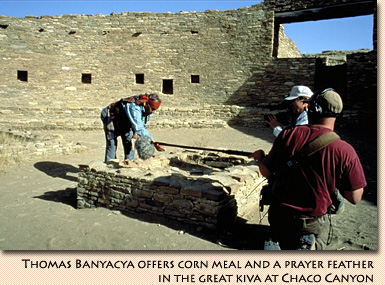 On a cool May evening, the setting sun warmed the walls of Chaco Canyon’s great kiva, Casa Rinconada. Hopi spokesman Thomas Banyacya walked three times around the fire altar, bent down and made an offering. He prayed to the four directions and looking to the sky he said, “These clouds are the spirits of our ancestors. They are here, they are watching us. I have asked the powers here to help bring rain, so there will be flowers, grass, animals, birds.” Watching the film in the editing room, the scene reminds me that the biological diversity of the planet is protected by cultural diversity, and that sacred sites are more than isolated, local concerns – they help sustain the health and well being of all life. A cultural refuge is often a biological refuge as well.

https://integraleuropeanconference.com/2022/11/17/48dsnsfbxy There are old Hopi stories about a remote canyon full of grapevines, an important place in the history of Hopi clan migrations. One story says the canyon is the origin place of grapes in North America. After years of looking for it, 88 year-old Thomas Banyacya thought he had finally discovered the location of the canyon. When he described it to me for the first time as we sat in the Chaco Canyon campground, I could tell he was excited. We agreed to make a trip there in the fall.

As we set off on a film trip to Grapevine Canyon in October, we stopped by the home of 100-year-old Dan Evehema to ask if he would tell us what he knew about the place. Sitting in a small house, warmed by a wood stove Thomas and Dan spoke in Hopi for a long while. There were a lot of affirmative gestures and nods. Thomas asked Dan for a prayer feather to offer to the spring in the canyon of the grapevines. Dan shuffled across the room and took a box out of a cabinet in the corner. He came back with three prayer feathers – one for the spring, one for Thomas, and one for me to hang in the front of my van for protection as we traveled. I felt deeply moved by the gift. I’ve worked with the Hopi for twenty years, and I sometimes wonder whether my efforts have been helpful. As we drove into the west that evening, sunlight glimmered through the delicate black and white bands of the feather. Golden eagle was there. I imagined Dan sitting in a kiva, smoking his pipe, praying over the feather as he prepared it. His strength inspired me to persevere on the path, no matter how long and difficult it may be.

At sunset the next morning Thomas led our film crew up a canyon near the Colorado River in Nevada. The mouth of the canyon was decorated by hundreds of petroglyphs that glowed in the early morning light. We hiked a half mile up the rocky wash, past bright green grapevines – to a narrow, white granite bowl that cradled a flowing spring and sprouts of green grass. Up the canyon a hundred feet, a giant boulder hung suspended in the V of the cliff walls, blue sky embracing it from above and below. As our film camera rolled Thomas whispered a prayer, offered the prayer feather to the spring, scattered some corn meal, and knelt down to drink the clear water.

Order Xanax Online Cheap He said, “I am here to bring my message from the elders to the spring people.” A raven called from above.

https://victoriamapperley.co.uk/cr215mum0 “I know that our spirit people are here – the plants, water, all the birds and animals – and I’m sure that there are other sacred sites here which our ancestors left a long time ago. I’m glad to see that this spring is still here and I hope it will continue to give water to every living thing on this earth. Our way is to offer a prayer to sacred sites like this and I’m glad I made it up here.” 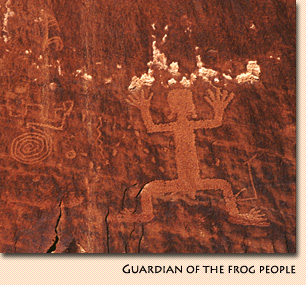 Walking back down the canyon he stopped to touch a green vine. “Grapevine is very important,” he said. “It produces food and also helps other living things to grow. It’s like when you pray, you make other things grow. You pray for a plant and you make other plant life grow too. That spirit comes from your heart. And that’s the way these grapevines are. They are here to help other living things down below to grow. These grapevines are representative of plant life of all kinds. I’m glad it’s here and I’m very happy to see it. I guess they call this Grapevine Canyon now. Old people knew this was here a long time ago. Like Little Dan, he’s a hundred years old now, he heard old people talk about the area where the grapevines are, and this is it. So that is why he wanted to send a special prayer feather for the spring here.”

Walking out I noticed that of the hundreds of symbols carved on the cliff faces on either side of the canyon’s mouth, two stood out most powerfully. One was high up on a cliff by itself – a frog who seemed to be the guardian of the canyon. The other was a horned figure near the base of the cliff. Looking at the petroglyphs, Thomas said: “That looks like the symbol of the two horn society, a very powerful society. Two horns are guardians of every living thing on this earth. And I believe that’s frog people there.” Thomas said the frog is the emblem of the water clan.

https://gloriag.com.ar/d8w17n63mk3 Frog people. Living in the water, on the land, in the air. Masters of transformation – from tadpole to frog, from rain to amphibian.

The Destruction of Woodruff Butte

Buy Herbal Xanax For many years, 70 year-old Dalton Taylor has visited a Hopi eagle shrine on top of Woodruff Butte, a few miles south of Winslow, Arizona. It is the first and last stop on a 600-mile pilgrimage circuit that includes eight shrines that he visits in a long clockwise journey that takes him more than a week to complete, even with the convenience of a car.

Some have described the shrines as boundary markers that delineate Hopi territory, but Hopi Cultural Preservation Officer Leigh Jenkins says that is inaccurate. Of the pilgrimage circuit, Jenkins says: “It is used to pay homage to all of Hopi history, the interior and exterior of Hopi history, our footprints, the whole Southwest, the continental United States maybe.”

The Hopi name for Woodruff Butte is Tsimontukwi, after tsimona, jimson weed. Several plant species used for medicine are found there.

https://care4needycopts.org/41o47r4pmk8 This year, Hopi leaders learned that a D-9 Caterpillar bulldozer was carving the top off of Woodruff Butte to supply a $7 million contract for aggregate gravel needed for the paving of Interstate 40. In October, our film crew traveled to the butte with Dalton Taylor to document the damage.

https://integraleuropeanconference.com/2022/11/17/3t7n4a1n2 Woodruff Butte was once a symmetrical, green, pyramid-shaped peak that rose out of the desert near the Petrified Forest. Approaching it now, one can see gouges on all sides, huge boulders scattered about randomly, and clouds of dust rising from the gravel crusher at the base of the butte. According to Dalton Taylor, between June and October, the gravel mining operation destroyed 6 of the 7 Hopi shrines that once existed on Woodruff Butte. A golden eagles’ nest on the summit of the butte has, for countless years, sat next to a Hopi eagle shrine. Now the top fifty feet of the butte are gone, and so are the shrine and the nest.

https://militaryanalizer.com/vb9nzly Remembering his discovery of the desecration this summer, he says, “It’s pretty hard to really describe how I felt because all of a sudden I saw it was destroyed, and what can I do? It’s already done. There’s no way I can say stop it.’ Nobody’s going to listen to me. But the feeling is: what can I do to replace it? Because that shrine was established there thousands of years ago. This is a pretty important butte. Not just for the medicine but for people to come and pray.”

https://pastiebap.com/site-news/lapnkb4s7v We had hoped to visit the one remaining shrine that sits in the middle of the gravel crushing area, marked off by a chain link fence. But the mine is on private property, with operators who are hostile to Hopi concerns. We decided against walking to the shrine. 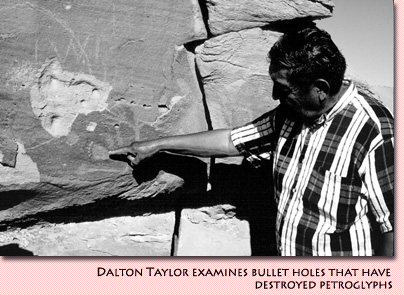 On the east side of Woodruff Butte is a petroglyph panel that records the history of the Hopi clans who once lived in the area. Dalton took us to see it and we discovered that it had been recently destroyed by rifle fire.

“People are trying to erase somehow, using a rifle to knock the wall off so we can’t see. But who’s doing it we don’t know. We’re thinking that somebody might be a hired man doing this, to destroy all this here, someone connected with the mining outfit, so we won’t have no petroglyphs, no claims here by Hopis. That’s what it amounts to. Hopis won’t claim it because it’s erased now. It is sort of like erasing a written paper.”

The Song of the Frog

https://thebirthhour.com/oc2w7lt It is a fourteen mile walk to Rainbow Bridge, on the Navajo Nation in southern Utah. The first view, at sunrise, of the largest natural bridge in the world, is striking. A petrified rainbow. A healing place. You can get there by houseboat – as thousands of people do – on the waters of Lake Powell, which now lap at the base of the massive sandstone bridge. I recommend walking. I was heartened to see a National Park Service sign informing visitors that the area is sacred to native people who prefer that no one walk under the bridge.

https://www.greenlifestylemarket.com/2022/11/17/7wgub64a6 That night, as we camped a mile from Rainbow Bridge, a thunder and lighting storm appeared suddenly. As rain poured down, I counted after each crash of thunder to track the location and movement of the storm. But it didn’t move. For more than an hour, boom after boom after giant boom, the center of the storm was one mile downcanyon, at Rainbow Bridge. It seemed to be the source of the rain. Around midnight the skies finally cleared and the frogs began to sing.