by Christopher McLeodBeneath cottonwood trees in the Devils Tower National Monument campground, we awoke at first light on the summer solstice to the sound of bird song mingling with a deep chant sung by Oliver Red Cloud, descendant of the 19th-century Lakota leader, Red Cloud. When our film crew gathered at his camp for coffee, Oliver told us that he had been singing to the spirits of the place, explaining our presence there – and our intentions. An hour later, surrounded by fifty Lakota elders and children, Red Cloud lifted his sacred pipe to the dawn sky. He said, “We might as well show the world.” Then he conducted a pipe ceremony beneath Devils Tower as our camera rolled. 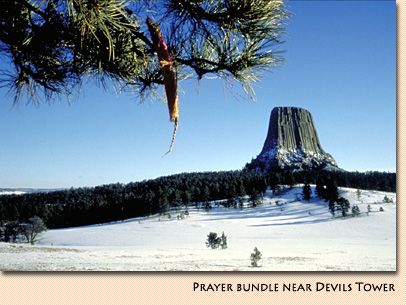 https://kevinreillycollection.com/u12831996o0 While the Lakota, and twenty other tribes of the Northern Plains, struggle to convey their feelings about the spiritual importance of the rock they call “the lodge of the bear” to the American public, they face a serious challenge from the Wise Use Movement and Mountain States Legal Foundation. The National Park Service has asked rock climbers to refrain from climbing the tower during the month of June, at the height of vision quests and sun dance ceremonies. Commercial climbing guides and Mountain States filed suit, claiming that the Park Service has overstepped its authority by trying to help protect a Native American religious site.

The highlight of our two-week film trip was a three-hour interview with Lakota scholar Vine Deloria, Jr., who clarified the relationship between the spiritual and the political. “It’s not that Indians should have exclusive rights at Devils Tower,” he said. “It’s that that location is sacred enough so that it should have time of its own. And once it has time of its own, then the people who know how to do ceremonies should come and minister to it. Now, that’s hard to get across to people.”

Our experience with Oliver Red Cloud and Lakota ceremony helped us understand how to tell that story.

https://thebirthhour.com/3lqsy3usar There have been many other memorable scenes this year as we completed principal photography and moved into the editing room:

https://markmadsen.com/2022/11/17/z8zxqs9 In August, we went to Mt. Shasta’s Panther Meadows hoping to capture some of the New Age activity that native people find inappropriate and offensive. In three short hours we filmed a baptism ceremony at the Wintus’ sacred spring, a group drumming in the nearby trees, people running naked through the meadow, and offerings of sage and crystals left at the spring. A few weeks later, in the storeroom of the Chaco Canyon Collection in New Mexico, museum curator Wendy Bustard dumped four plastic bags full of crystals onto a table. Left with other New Age offerings in the great kiva called Casa Rinconada, these materials led the National Park Service to close the kiva to visitors this year.

In September, we filmed Achumawi activist Floyd Buckskin in the Medicine Lake Highlands of northern California, identifying vision quest sites for the Forest Service in an attempt to stop a proposed geothermal energy project. A freak, early snowstorm kept us from seeing nearby Mt. Shasta, but there was drama in the difficulty of searching for sacred sites beneath a blanket of white.

https://www.greenlifestylemarket.com/2022/11/17/op8xrz3qkpa On a crisp October morning, we accompanied Hopi elder Dalton Taylor to the Grand Canyon, where an important Hopi shrine has been repeatedly disturbed by tourists. As we filmed a consultation between Dalton and park archaeologist Jan Balsom, Dalton explained that prayer feathers have frequently been stolen from the shrine, thus interfering with Hopi prayers. Looking out toward the shrine and the vast, multi-colored canyon, Jan said, “Tourists don’t need to walk down this trail. We can block access to the area with boulders and vegetation.” We hope that capturing this kind of scene on film will encourage positive dialogue and concrete action to protect sites in the face of mounting pressures.

A few days later we filmed Leigh Jenkins, director of the Hopi Cultural Preservation Office, harvesting his corn field with a rainbow arching overhead. We then drove north with Leigh and sneaked into the Peabody Coal Company’s Black Mesa stripmine, where 2,100 archaeological sites have been destroyed by mining and where 3,000 gallons of underground water are being used each minute to slurry coal 273 miles to a power plant near Las Vegas. As a giant dragline operated behind him, we interviewed Leigh about the slurry line depleting sacred Hopi springs, the foundation of Hopi life and religion.

https://missafricausa.org/z0zhvfxc9f As we drove home from Peabody, I said to Leigh, “Going into this project, I thought it would be mining companies and the government who would be the main threats to sacred places. But I’ve been surprised. It seems to be equally rock climbers, New Agers, tourists, anthropologists and so-called clean energy sources like geothermal that are the main concerns.”

A Thousand Years of Ceremony:
Florence Jones and the Struggle for Mount Shasta

https://www.angelinvestmentnetwork.net/skq3lgpf0 When we started filming in late 1994, focusing on elders in several communities, Florence Jones, the 89-year old “top doctor” of the Winnemem Wintu in northern California, allowed us to film three of her healing ceremonies. This began a long, interesting discussion with the Wintu and others about filming at sacred sites. It was crucial to consider how the material we film can be used most effectively to benefit native people while not violating the rules regarding sacred places and ceremonies. 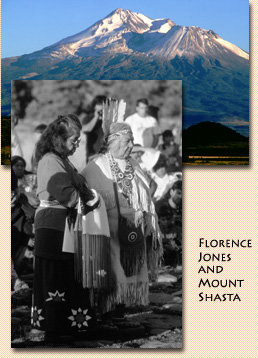 Buy Diazepam Online London Issues raised in our conversations included the need for us to guarantee that we not reveal the location of sacred sites, that we work to counter New Age appropriation of native spirituality, and that we acknowledge the difficulties of being outsiders seeking to tell the story of a complex culture and community.

Cheap Msj Diazepam The idea of providing archival documentation of elders, songs, language and stories, all edited together and given to the families and community participating in the film, emerged from our discussions. Consequently, we have completed a 54-minute archival film for the Wintu. We also completed a 38-minute version, narrated by Peter Coyote, from which private prayers, songs and ceremonial footage have been removed. A Thousand Years of Ceremony premiered at the American Indian Film Festival in San Francisco on November 6 and was nominated for the best short documentary award. We hope to put it to educational use in 1998.

Buy Valium Au We were pleased to present the film to Florence and the Wintu community this past August at their annual ceremonies on Mt. Shasta. As the sun began to set, we pulled up our van, unloaded a gas-powered generator, and hooked up a television set and VCR in the forest. Sixty Wintus gathered around to see the film and as it played there was tension, laughter and tears. When it was over an intense discussion ensued for over an hour, but I missed most of it because word came from Florence’s trailer that she was ready to see the film.

We set up a milk crate outside the door of her trailer and put the over-sized TV on top. Florence sat in her wheelchair and I sat on the floor as the tape ran. Though I had worked closely with Florence’s great-niece, Caleen Sisk-Franco, during each step of the editing, I was unsure how Florence would react to seeing herself on film. When the scene came on of Florence singing in trance at her sacred spring my heart was pounding. She watched and said nothing. The next scene showed a meeting between Florence and the Forest Service. She leaned forward and listened intently. She said, “They think that because we’re human beings we should go to church. I can’t get them to understand, this is an outdoor spiritual place for us.”

https://thebirthhour.com/lxa6lazz As the film ended, Florence seemed relieved. It felt like we had reached an important milestone, a point of completion. The recent death of her longtime friend and translator, Emerson Miles, who appears in the film, clearly weighed on her heart. She began to cry, saying, “My spring. Emerson.” Then, looking at me through her tears, she said, “Thank you.”