At the end of January and in the midst of El Niño’s raging storms, we traveled to Los Angeles to attend a meeting between native California activists and a United Nations investigator of religious intolerance in the United States. Caleen Sisk-Franco (Wintu), Mark Franco (San Carlos Apache), Chris Peters (Pohlik-Lah/Karuk) and Floyd Buckskin (Achumawi) testified from personal experience about sacred site struggles in northern California at Mt. Shasta, the High Country of the Siskiyou Mountains and Medicine Lake. 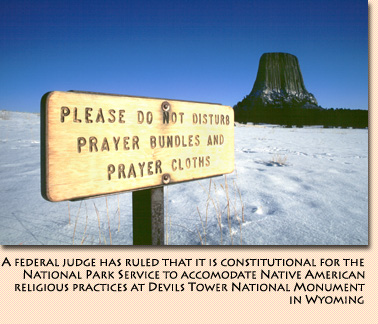 Regarding the visit of U.N. rapporteur Abdelfattah Amor from Tunisia, a spokesperson for Senator Jesse Helms said, “There is no problem with religious intolerance in this country. The U.N. should stop wasting time and money investigating the United States, and start fixing its own sinking ship.” It is exactly this mindset that the native activists were trying to counter in their testimony to the U.N. investigator.

Each spoke about American society’s lack of respect for both their religions and the spiritual landscapes to which they minister on behalf of all life. Caleen Sisk-Franco explained that government land managers fail to understand the connection between Wintu religion, medicinal plants, a sacred spring on Mt. Shasta and healing. As a result, the Forest Service has encouraged proposals for a ski resort and allows New Age rituals at the Wintu sacred spring. She said, “When you take Mt. Shasta, you’re taking the heart of the whole creation – what holds the world up. ”

The native speakers were striving to convey the importance of their religions to a U.N. investigator who spends much of his time hearing about abuses heaped upon the major “world religions” – Christianity, Judaism, Islam and Buddhism. After the meeting, Chris Peters observed, “We need to make him understand that our religion isn’t just a fad. It’s something viable, with a history, that works for the world. Everyone seems to understand and respect that when dealing with Christianity or Islam. Why not with us? Why don’t we get that respect and attention?”

Peters explained to the U.N. investigator that in 1988 the Supreme Court ruled that First Amendment guarantees of free religious practice do not apply to large areas of federal land considered sacred by Native Americans. Subsequent attempts to gain legislative protection by amending the flawed American Indian Religious Freedom Act were shelved by Indian activists after the Republican takeover of Congress in 1994. Sacred sites are now at the mercy of individual government officials who bend in the winds of political change.

“The government can bulldoze, mine, remove an entire mountain sacred to native people and we have no litigative recourse,” Peters continued. “We can’t go to court. This is the epitome of religious intolerance because our practices are tied to the earth, to sacred places, and these are not protected in the United States.” The Supreme Court’s 1988 GO Road decision was “the final act of physical and cultural genocide,” said Peters. As a result, “at Little Medicine Mountain (CA), Mt. Taylor (NM), Mt. Graham (AZ), and Enola Hills (OR), the U.S. government has contracted with corporate America to destroy a sacred place. Our holy land can be destroyed and we cannot bring a legal action to stop it. ”

The idea that land-based religions were not part of America’s religious freedom doctrine seemed surprising to Mr. Amor. Speaking through an interpreter, he asked what the native representatives wanted to change about their situation. Chris Peters replied, “At this point in America, we can’t get our grievances heard. We can’t tell the American people that religious freedom abuses are happening right here under their noses. We just want to get a fair hearing in the courts.” The investigator was incredulous when confronted with the fact that Native American religious freedom issues cannot be addressed in the U.S. legal system. When the rapporteur repeated the question and Chris gave the same answer, he shook his head, seemingly overcome with the gravity of the situation. Unfortunately, there was little more to be said, as Mr. Amor announced that he would take the testimony he had heard very seriously, but that he was late for another meeting.

On his way out, the Indian representatives handed the rapporteur additional written information and video tapes concerning sacred places and their struggles to protect them. Caleen gave him a packet of information about Mt. Shasta which included our recently completed film, A Thousand Years of Ceremony: Florence Jones and the Struggle to Save Mt. Shasta. He thanked her and she turned to us with a smile and said, “Well, that’s what the film is supposed to be for!”

After months of transcribing and preparing our footage for the editing process, and after initial consultation with PBS, we have decided to expand the length of our finished film from 90 minutes to two hours. We have many compelling stories about the significance of cultural landscapes and the long struggles to protect networks of sacred sites that bind those landscapes. It is a privilege to be able to document the incredible life experiences articulated by our participants.

The Sacred Land Film Project is pleased to announce the promotion of Malinda Maynor to Co-Producer. Malinda joined the project in June 1997, after receiving her M.A. from Stanford’s Documentary Film and Video Program. She is a Lumbee Indian from North Carolina and was the first Lumbee woman to attend Harvard, where she graduated cum laude in American History and Literature. Malinda’s first two films, Real Indian and Sounds of Faith, were screened at the Sundance Film Festival in 1997 and 1998, and have won awards at other festivals. Malinda is an instructor in American Indian Studies at San Francisco State University, and brings well-grounded experience, opinion, and cultural interpretation to the project. As the project moves into post-production, Malinda and project director Toby McLeod create a powerful team to tell the story of Native Americans’ struggles to protect sacred sites. 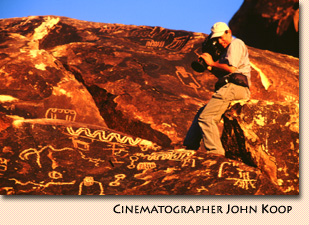 Our annual year-end mailing was a tremendous success this year – we were able to raise over $35,000 from individual donors who support our work. We received donations from a record number of new donors, which is always a great boost to our spirits as we continue this challenging project. Each of you who contributed has not only become an important supporter of this project, but you have advanced the struggle to protect sacred places through public education. Thank you!

In addition to our post-production work, we are developing a partnership with Chris Peters and the Seventh Generation Fund to organize a national campaign to protect sacred sites. Seventh Generation is a native-controlled, grass-roots activist organization based in Arcata, California. They have a long and successful history of public education regarding political issues of importance to Native Americans. In the Light of Reverence will be used to anchor a public education campaign aimed at amending and strengthening the American Indian Religious Freedom Act – 1998 is the 20th anniversary of this landmark legislation. 1999 will be the year that Seventh Generation and its popular Honor the Earth campaign will focus public attention on threats to sacred sites, and they will be using our film and study guide as key tools to raise awareness in Indian and non-Indian communities.

With these important initiatives, the urgency to finish In the Light of Reverence grows ever greater. We have successfully raised two-thirds of the funds needed to produce the film ($307,000 raised so far), but we still have $180,000 to go. These funds will be used to hire an editor, rent an editing system, complete final filming in northern California and the Southwest, and interview government officials in Washington, D.C. The only obstacle to completing the film in the next twelve months is additional funding. We have requests pending at several foundations, ITVS (Independent Television Service), and NAPT (Native American Public Telecommunications), but we have come this far thanks only to the generosity of concerned individuals.

To those of you who have already given generously, we say thank you. If you would like to take part in this important campaign to document sacred site struggles in the United States, we hope you will consider making a tax-deductible donation and filling out the coupon on the Get Involved! page. We also seek volunteers to donate their time. Thank you very much for your interest and support!

“To our grandfathers, the Black Hills were the center of life. Those areas all around were considered sacred, and were kept in the light of reverence.”

Forest Service Says No to Ski Resort on Mt. Shasta

U.S. Forest Service Supervisor Sharon Heywood announced on February 19, 1998 that she would recommend against the construction of a $22 million ski resort that threatened Native American spiritual practices and sacred sites at Mt. Shasta. For fifteen years, a coalition of Indian and other activist groups have been battling local political leaders and residents who see the resort as a key to the area’s economic development. Mt. Shasta is a ceremonial site and is central to the cosmologies of many native communities in northern California. Supervisor Heywood cited native concerns as primary in her decision to recommend against the construction of the resort. Heywood does not have final say in the matter, but agency higher-ups in Washington D.C. are likely to follow her recommendation.

Activists celebrated the decision and the apparent statement of concern for Native Americans’ religious freedom and cultural preservation. Lawsuits, appeals, and a proposal to expand an existing ski area lower on the mountain may follow, so the fight isn’t over.

A Victory for Devils Tower 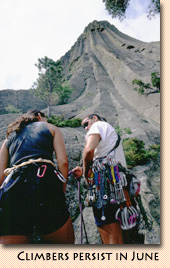 On April 3, 1998 a Federal judge in Wyoming ruled that the National Park Service’s attempt to protect religious practices at Devils Tower is constitutional. The Park Service had instituted a climbing management plan which included a voluntary ban on climbing during the month of June, at the height of ceremonial activity for the 20 Native American tribes that consider Devils Tower a sacred place. (Eighty-five percent of climbers chose not to climb the tower in June of 1996 and 1997).The U.S. District Court’s ruling dismissed a lawsuit filed in 1996 by several commercial climbing guides who argued that the voluntary ban violates the First Amendment prohibition of government sponsorship or establishment of religion. Judge William F. Downes wrote, “the government may (and sometimes must) accommodate the religious practices and…it may do so without violating the Establishment Clause” of the First Amendment.

Mountain States Legal Foundation has appealed the decision. Steve Gunn of the Indian Law Resource Center observed, “These appeals are very expensive,” and this is a clear indication of how high a priority it is for conservatives to stop government recognition of and protection of Native American sacred sites on federal land.

“It’s not that Indians should have exclusive rights at Devils Tower. It’s that that location is sacred enough so that it should have time of its own. And once it has had time of its own, then the people who know how to do ceremonies should come and minister to it. That’s so hard to get across to people.”