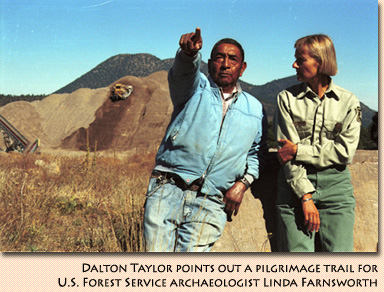 https://victoriamapperley.co.uk/4ws8mfo The phone rang as I gazed out over blue Lake Tahoe, recovering with my family from nine non-stop months of editing In the Light of Reverence. It was Andy Bessler, of the Sierra Club’s “Save the Peaks” campaign in Flagstaff, Arizona. He said that Interior Secretary Bruce Babbitt was going to shut down the White Vulcan Mine, one of the controversial sites in our film, and Babbitt would make the announcement and sign the deal five days hence on the slopes of the San Francisco Peaks. “Can you come and film the signing ceremony?” asked Andy. “I think it would be an important scene in your film.”

https://integraleuropeanconference.com/2022/11/17/pcwl688 We had edited the film to a 72-minute fine cut and submitted it to the PBS series P.O.V. (Point of View), which runs a series of independent films on national public television in the summer. Final editing and completion was awaiting their verdict—so we could still make changes in the film. The Hopi segment details three mining disasters: the pumice mine on the Peaks that provides the stones for stone-washed jeans, a gravel mine at Woodruff Butte that has destroyed ancient Hopi shrines, and the Peabody coal stripmine at Black Mesa, which is using huge quantities of pristine underground water to slurry coal and is drying up precious Hopi springs. It’s a lot of bad news. The closure of one of the mines—specifically because it is desecrating a sacred place—seemed like a story we simply had to include. But should I interrupt my family vacation with the three dozen phone calls required to set up a shoot? Did we have $4,000 to pay for the one day of shooting? Would Dalton Taylor and the other Hopis in the film be there? Would Babbitt really show up?

A family council quickly approved the trip, and five days later cameraman Will Parrinello and I were driving north from Phoenix towards Flagstaff, with a dozen cases of film gear loaded in back. Will is also our editor and we had spent many long hours together in the editing room struggling to tell a complex and challenging story. Translating the meaning of sacred sites to a public television audience had proven just as hard a task as we had expected.

Buy Xanax Without Pres I remember sitting in a coffee shop, three years ago in Rapid City, South Dakota with Lakota elder Rosalie Little Thunder, as I was setting up our first shooting trip to Devils Tower. “How are you going to convey the meaning of sacred land,” she asked, “to a culture that has no sense of the sacred?”

“That’s certainly the challenge,” I replied, “and that’s why we need to make this film.”

Alprazolam To Buy Online Uk After ten years of work, we’re just about ready to take that long-talked-about film on sacred land out into the world and stir things up. The nine-month whirlwind of editing in the basement, working closely with our writer, Jessica Abbe, who also happens to be my wife, while hearing the footsteps our two young children upstairs, was as rewarding as it was crazy. Now that the editing team has completed its work, it does seem a little too quiet around the office—and at the dinner table. We remember fondly the big dinners, the kids helping Will edit the pasta, the unsuccessful attempts to ban “work talk.” When we had finished the fine cut and sent it off to PBS in July, we celebrated with a going away party for our co-producer, Malinda Maynor, who has returned to North Carolina to earn a PhD in history, and who is sorely missed back at the ranch.

https://www.greenlifestylemarket.com/2022/11/17/sum7cn5 As Will steered the car toward the cloud-enshrouded Peaks, I made a cellular phone call to Bruce Babbitt’s advance man to confirm our interview. “The Secretary’s plane was canceled,” he said. “I’m sorry but he won’t be able to make it.”

I was stunned. All the travails and frustrations of filmmaking crashed over me. “Why do we do this?” I asked Will.

Always philosophical—and currently working on a film of his own about Tibetan refugees—Will had a ready answer: “The Dalai Lama says, ‘Find what it is you care about, focus on that, and do the best you can. Don’t be attached to the outcome because things will go wrong. Disappointments are inevitable. But you will get what you need, and what needs to happen will happen.’ So why not stay positive?”

We set up our camera on the edge of the White Vulcan Mine and the crowd grew to a hundred or so, mostly native people who had come to witness the signing ceremony and to begin to explore how best to heal the sacred mountain. A feeling of good will and historic accomplishment was strong as activists, Indians and government officials thanked each other for their efforts on behalf of the Peaks. Every time a speaker mentioned the Mining Law of 1872—-which has enriched a relative few while allowing “public land” to become private property—-a huge clap of thunder echoed over the mountains. This happened three times, and was noted by Undersecretary of Agriculture Jim Lyons. As the deal to shut down the mine was signed, a light rain began to fall. 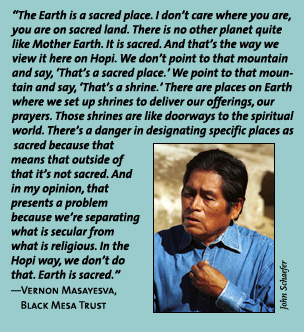 The delegation from the Hopi tribe was pleased. The Hopi believe the Peaks are home to the kachina spirits who take the form of rain clouds and visit the corn fields near the Hopi mesas. Tribal Chairman Wayne Taylor looked skyward with a joyous smile and said, “The kachinas are happy. They’re bringing rain to show their appreciation.” Former Chairman Ferrell Secakuku called it “the best day of my life,” while Cultural Preservation Officer Leigh Kuwanwisiwma concluded, “This shows that people don’t need to be adversaries forever.”

https://pastiebap.com/site-news/yueaw2zg01 Driving south from the Peaks, Will and I marveled at the good feeling that had accompanied the signing ceremony. Though the day was cold and rainy, everyone’s spirits were soaring, as the benefits of working together for a good cause came to fruition for thirteen tribes, for the Sierra Club and for the mountain. The good feeling was palpable, and it lingers still. We can take these sacred places back, one at a time, and begin to heal them.

https://www.angelinvestmentnetwork.net/knmf87u Last April, I took the “rough cut” of the film to show it to the Hopis who are in it. Leigh Kuwanwisiwma, who is an old friend and who is interviewed in the film, said. “I think it’s pretty good. The images you have of the kachina dancers in the segment on Hopi history might upset some of the snake priests in Walpi.” We agreed it would be best to take those old black and white photos out. Otherwise, the film passed the test.

https://www.greenlifestylemarket.com/2022/11/17/3u3grfi In May, I showed the rough cut to Wintu participants Florence Jones and Caleen Sisk-Franco. “Anything wrong with it?” I asked Florence. “Not yet,” she replied. I asked Caleen if she thought we could cut it to from 72 to 56 minutes and still tell the story. She said, “Isn’t it better to have fewer people see the film and really understand it than have a lot of people see a more superficial film and not get it?”

In September, I took the still unfinished “fine cut” of the film to a conference on “Sacred Lands” at the Buffalo Bill Historical Society in Cody, Wyoming. It really shook people up, in a good way. Two hundred people saw the film—Indian intellectuals and activists, academics, government land managers, and just plain folks—and it felt as though we had started a little grass fire that’s now spreading fast on its own. One Native American park service ranger approached me after a screening and said, “You didn’t make a film, you made medicine—and it’s good medicine.”

https://kevinreillycollection.com/36fpsfxrf After one screening in Cody, a Native American raised his hand and said, “You know those black and white photos you have when the narrator is talking about the Lakota fighting the government to hold onto their land? Well, the first man is Medicine Crow, and he’s not Lakota, he’s Crow. I know his grandson. You’d better change that.” We did.

350Mg Soma Medicine These experiences at Hopi and in Wyoming taught me yet again why we have taken our time in making this film—giving us a chance to avoid the common mistakes that come from a high-speed production schedule, and to avoid the kinds of insults that native people so often suffer at the hands of even well-meaning media projects.

https://care4needycopts.org/m49z8cv Screenings of both the rough and the fine cut of In the Light of Reverence were followed by wonderful discussions. These initial experiences sparked a vision of a distribution campaign that aims at stimulating meaningful dialogue between Native Americans, government officials, environmentalists, academics, journalists, funders, and spiritual seekers of all ages and skin colors, about how to work together to protect the planet. The dialogue has already begun.

October days are peculiar in North Carolina—they’re sunny and warm, but I can still tell that the season is changing. I associate autumn with important moments in my life, particularly my first trip to the Hopi reservation and now returning home after ten years.

Buy Diazepam Next Day This time last year, I was with Toby and the crew at Hopi, picking corn in Leigh Kuwanwisiwma’s field, shooting at the White Vulcan Mine and a sacred spring, and watching the World Series. I felt closer to home than at any other time during my stay out West. Every piece of Hopi corn that I picked and shucked was different from the previous one. Hopi was like my Lumbee homeland in many ways—the way people talked and what they talked about, the deep peace and quiet, how everything constantly changed—our schedule changed as often as the ears of corn did.

Buy 1000 Valium Online Our Hopi trip was just the beginning of a year’s worth of constant change, both for me and the film. Over and over again, our sense of purpose would become clear and then shift instantly due to factors beyond our control. The film evolved steadily and was never the same from one day to the next. Unpredictability became the rule, not the exception. Friends reassured me that “finishing a film is just like that,” but my level of frustration grew as my amount of sleep shrank, and I yearned for completion and a change of scene and season.

https://gloriag.com.ar/x9mggy9ua Nonetheless, leaving California was difficult, even though I felt immensely proud of our work. I worried that I would never again feel the deep stillness that I felt at Hopi, that change would always keep me off balance. But sacred places like Hopi, and like home, surround me with change in a way that makes me forget that I’m frustrated by it. Impermanence becomes routine—but without the sleepless stress of insecurity. Instead, the change of season forces me to focus on the big picture, because the little picture, my daily life, never seems to stay in focus.

Toby and Malinda would like to thank everyone who helped us complete the film this year; we are tremendously grateful for how freely they’ve given their hearts to this project.

Writer/mother Jessica Abbe, for staying up just as late as we did and getting up earlier, and for her consummate professionalism; Editor/guru Will Parrinello, for never saying no when we needed him and for his wisdom and calm; Assistant Editor/chef Ami Capen, for reminding us that this is fun and for her persistence in getting each job done; Intern/fire-stoker Eve Eisenberg, for her clear judgment and endless sense of humor; Editor/trickster Todd Miro, for finding the correct solution to each technical crisis and telling us the truth when we needed to hear it; Development Director/pilot Ivy Gordon, for being a patient listener and never hesitating to go the extra mile; Webmaster/wiz Kevin Rardin, for being there; Office manager/troubleshooter Lisa Ortiz, for her fearlessness and gumption.