Living in the harshest of climates, the indigenous peoples of Russia’s far northern Arctic have survived for thousands of years through knowledge systems and practices that revere the spirited landscape they inhabit. Their land is full of sacred sites whose preservation has been—and continues to be—essential to their endurance as a culture. Many sites are tied to their traditional livelihoods as reindeer herders, fishers and hunters; others reflect their ancestral relationship to the land through reverence of “grandmother” and “grandfather” spirits; still others represent nature spirits of seas, rivers and mountains, whose veneration may aid in safe travel or successful hunting. Their ability to maintain traditional cultural and sacred belief and practice has not only furthered their own survival but has also protected the biodiversity of their environment. According to Mikhail Todishev, executive director of the Association of Indigenous Peoples of Northern Siberia, “Sacred sites teach people rules of behavior, such as how and when to hunt.”

However, these people, their environment and their sacred sites are no longer remote and untouched. Increasing natural resource exploitation, weak environmental laws, feeble protection of indigenous rights by state and local governments, and growing difficulties in maintaining traditional livelihoods are among the challenges they face.The issue of protecting the sacred sites of indigenous peoples of the Arctic was largely ignored until the late 1990s, when a number of international groups recognized the need for a project to enhance the protection of such sites and began preliminary investigations. In 2000, a coalition of organizations led by the Russian Association of Indigenous Peoples of the North (RAIPON) initiated a program to document sacred sites in two regions of the Russian Arctic and explore protection measures. RAIPON partnered with Conservation of Artic Flora and Fauna (CAFF) and the Danish Environmental Protection Agency, which funded the project. In January 2004, CAFF released a 100-page technical report entitled “The Conservation Value of Sacred Sites of Indigenous Peoples of the Arctic: A Case Study in Northern Russia—Report on the State of Sacred Sites and Sanctuaries.” According to the report, “The project was designed to support integrated conservation of Arctic biodiversity and the cultural heritage of northern indigenous peoples, through documenting the biological and cultural significance and status of indigenous peoples’ sacred sites and sanctuaries.”

The project focused on two pilot regions: the Yamal-Nenets Autonomous Okrug in northwest Siberia and the Korak Autonomous Okrug in the Russian Far East, along the Bering Sea. From June to September 2001, field researchers visited select sacred sites, administered questionnaires and interviews with members of the indigenous communities, and held focus groups and community meetings. The head coordinators of the project, as well as many of the field researchers and assistants, were themselves indigenous people. The project documented 263 sacred sites in the Yamal and 84 in Koryak, although there are countless others that could not be included because of time and funding constraints as well as cultural restrictions barring access to sites.

The CAFF report presents the research results from these two pilot regions—including detailed descriptions of the indigenous peoples and their sacred sites and legends, threats to the region, and current protection status. It also lays out a wide array of specific policy recommendations.

According to the report, in the Yamal-Nenets Autonomous Okrug, on a peninsula in northern Siberia, the project worked with the Nenets indigenous peoples of the Tazovsky district, which covers more than 100,000 square miles but is inhabited by just 16,300 people. Most Nenets are nomadic reindeer herders, and fishing is also an important livelihood activity. With more than 120,000 reindeer in the district, it is one of the most important production centers for meat, antlers and hides. Nenets today maintain the religious practices of their ancestors, making offerings and sacrifices at sacred sites along key reindeer migration routes. Many sacred sites are located atop hills, which are often the only distinguishing topographical feature of the flat tundra landscape. Sites are usually marked by the skulls, horns and bones of reindeer, or by sacred poles and sledges. Rituals are performed to pay respect to the spirit owner of a site and to seek assistance. Most sites have an associated legend: an ancestor myth or a story of a tragic or fortunate event or magical occurrence. The Okrug contains enormous oil and gas reserves and, unfortunately, resource exploration and extraction is polluting and destroying vast areas of reindeer pasture, fish-spawning habitat and rivers. This industrial development not only threatens the Nenets’ traditional livelihood but their sacred sites and fundamental spiritual connection to the land. It also threatens the region’s delicate ecosystem and biodiversity.

The second research area, the Koryak Autonomous Okrug, in the far northeast corner of Russia, covers nearly 187,000 square miles but is home to just 30,000 people. About one third of the population is indigenous, representing many different groups, and their communities are based primarily on reindeer herding or fishing. A collapse of state reindeer herding, however, has driven many more families to fishing and thus placed pressure on fish populations. The indigenous people of this Okrug, like the Nenets, maintain sacred sites that are interconnected with their livelihood and sustain their culture through telling stories of their peoples’ past. Rituals and offerings, such as reindeer fat, food and tobacco, are used to pay respect to the spiritual inhabitant of each site and ensure good fortune. Many sites, often on hills, are home to a rich array of plants and wildlife, including endangered species. The Koryak Autonomous Okrug is threatened by coal extraction, oil and gas exploration and precious-metal mining. 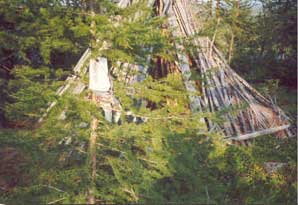 The report details both the environmental impact of threats, such as destruction of wildlife, vegetation and water supplies, and the impact on sacred sites. Increased development has brought increased access to sites by people unfamiliar with local culture and belief. Some sites have been burned or dug up, for example, by mining operations, while at other sites newcomers have looted sacred objects. The report also describes existing policy that may aid in preservation and recommends changes that could further this cause. The Russian Federation lacks a specific policy approach to the sacred sites of indigenous peoples and legislation to secure sacred sites, but existing laws related to environmental protection, cultural heritage and indigenous peoples’ rights could potentially be a means for sacred site protection. The challenge often lies in strengthening laws and ensuring that policies are enforced. For example, in the Korak Okrug, many local authorities are swayed by commercial interests in the mining industries, and thus tend to be opposed to legislative changes that establish protected areas or stronger indigenous rights.

The report advocates a “bottom-up” approach to sacred site protection, allowing indigenous communities themselves to designate sites and determine the most effective protection strategies. Along with empowering indigenous communities and enabling them to sustain their traditional livelihoods, local control and management of sacred places also protects biodiversity. According to the report, “Sacred sites provide a ‘win-win’ opportunity for strengthening biodiversity conservation and protect area networks through integrating various models of ancestral territorial management based on indigenous land use.” The report concludes with recommendations for further action: “Important challenges ahead involve not just identifying appropriate instruments but seeking to make them work in practice. For this purpose, strengthening indigenous peoples’ grassroots involvement in managing their heritage must take place, in parallel with policy recognition.”

The report also assesses the sacred site issue within regional and global contexts, and a thematic discussion explores broader questions, such as “What do sacred sites mean to indigenous peoples?” and “How are sacred sites significant for biodiversity conservation and ecological stability?”