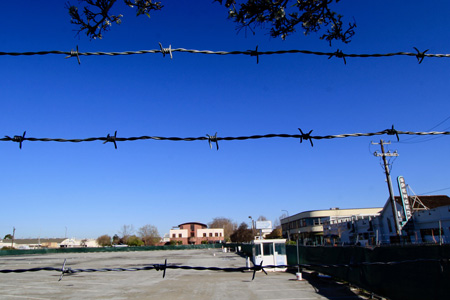 On the very same day that three judges at the California Court of Appeal heard arguments over whether to uphold lower court protection of the West Berkeley Shellmound and Village Site, the landowners erected a six-foot chain link fence and topped it with three strands of barbed wire. It was a gut punch. A couple of days later they installed 24-hour security cameras on light poles all around the 2.2-acre parking lot. Clearly, the five-year campaign to protect this landmarked, historic site has rattled the landowners—the Spenger Family Trust and the real estate firm of Ruegg and Ellsworth. Their plans to build a five-story housing and retail project on the site—and dig down eleven feet into the ancestral remains of the village site—have been delayed for years by the determined opposition of Ohlone people, religious leaders and activists.

The appearance of barbed wire surrounding a 5,700-year-old Ohlone sacred site is a sharp reminder of how settlers carved out Indian territory across the continent, brazeny appropriated land, and erected an apt symbol of Manifest Destiny—exclusive, arrogant, dangerous, vicious. To see this hideous symbol in the middle of a city—in Berkeley, California—a block from the Apple store no less, is surreal. There are now 93 No Trespassing signs on the fence surrounding the site. 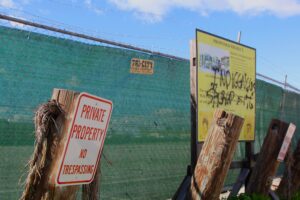 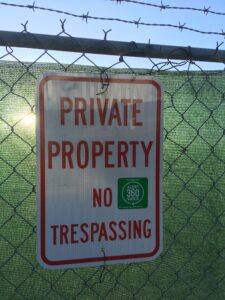 Lisjan Ohlone leader Corrina Gould said, “This is a violation of the Native American Religious Freedom Act. They are denying us access to pray at a sacred site we have honored for hundreds of generations. My people have never stopped visiting this site where our ancestors lived and are buried. The barbed wire is offensive. It’s paranoid and it’s sad.” Corrina is asking supporters to go to 1900 Fourth Street and tie a ribbon on the fence as a sign of solidarity and resistance and to say a prayer for the protection of this important cultural site.