https://kevinreillycollection.com/vtymgiap As the city of Minneapolis draws international attention condemning the murder of George Floyd by the police, let us also focus our attention on centuries of unresolved conflict over the Dakota peoples’ sacred landscape that surrounds and underlies the place where Mr. Floyd was killed. The racism and violence confronting Black Americans and Native Americans have converged in a cultural landscape of deep historic and spiritual importance.

Arrogance, technology and the ongoing domination of nature and people continue to threaten humanity’s survival like never before. A new understanding of history is essential to finding a way forward. We offer the following history of a revered and contested homeland as food for thought in troubling times, and as a morality tale offering some hope that we can find our way onto a healing path toward a future free of racism and violence.

Order Xanax Eu Minnesota, known as Mni Sota Makoce to the Dakota, is “the land where the waters reflect the skies.” The Dakota word Bdote means “where two waters come together,” representing the spiritual and physical place of creation for the Dakota people. Bdote is located at the confluence of the Mississippi and Minnesota Rivers (on the eastern edge of the Minneapolis–St. Paul airport, and south of the Twin Cities). This place of waters meeting is most often referred to as where the Dakota arrived in human form. Seven tribes of Dakota are said to have descended from the seven stars of Orion’s belt, arriving at the convergence of the Minnesota and Mississippi Rivers.

Bdote presents a potent example of a spiritual landscape overlaid with history, where sites of profound cultural importance are born near well-established sacred natural sites. The river confluence was the place of creation. Ceremonies were conducted at a flourishing freshwater spring and on a nearby hilltop. The land was taken away by colonizers, followed by resistance and hangings, as deceit, murder and military action sparked a long battle for truth and reconciliation. Dakota elder Dave Larsen describes the Bdote as “where everything began and where everything began changing.”

A Network of Sacred Sites 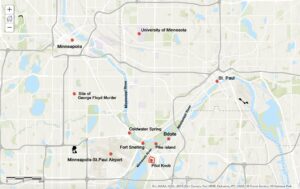 Pike Island, located at the Bdote, is central to Dakota history and is central to the genesis of the Dakota people. The name Pike Island originated after Zebulon Pike came to the island in 1805 and began appropriating Dakota land through deceitful treaties. Pike purchased 100,000 acres of land on which to build Fort Snelling, which is now revered as a historical landmark in western history. During the construction of Fort Snelling, which was led by Colonel Josiah Snelling, U.S. soldiers used a nearby spring as a temporary encampment because of its freshwater source.

https://www.greenlifestylemarket.com/2022/11/17/pubaeo4n6 Because of the encampment at Coldwater Springs, it is often considered the birthplace of Minnesota in western history. To the Dakota people, Coldwater Springs, Mni Owe Sni, is a place of healing, gathering and ceremony. The springs are northwest of Bdote and are home to Unktehi, the God of Waters. Coldwater Springs is now managed by the National Park Service as a tourist attraction and the Dakota people must acquire a permit to hold ceremonies there.

Buy Valium Legally Online Pilot Knob or Oheyawahi is a notable region of elevated terrain south of Bdote that holds religious and cultural importance to the Dakota, Ojibwe and Iowa people. The hill has been a gathering place for ceremonies for medicine and prayer to Unktehi. The north slope of Oheyawahi is known to Dakota people as Wotakuye Paha, “the hill of all the relatives.”

Buy Xanax Agora Together with the river confluence, these sites form a cultural landscape around Bdote that holds deep spiritual significance for Dakota, Ojibwe and Iowa tribes. It is no surprise that there has been conflict over land use at these sacred places, as well as a struggle to have Dakota voices, stories and place names represented and respected.

Broken Treaties and the U.S.—Dakota War of 1862

https://care4needycopts.org/vmdz6boyn A number of treaties were negotiated from 1805 to 1863 in which the U.S. government compelled the Dakota people to cede parts of their homeland for monetary compensation. The first treaty negotiation in 1805 was led by Army Lt. Zebulon Pike and saw the Dakota cede 100,000 acres of land at Bdote for $2,000. Of the seven tribal leaders present, only two signed the 1805 treaty. The leaders were relying on interpreters paid by the U.S. government to understand the treaty and it is unlikely that the leaders were aware of the exact terms of the treaty they were “negotiating.” In 1837, the Dakota were pressured to cede all of their land east of the Mississippi River. The U.S. government payed the Dakota far less than the land’s appraised value, while reserving, but not allocating, over one-third of the money for education, which turned out to be a system of boarding schools that Dave Larsen says, “broke our teaching line.” Minnesota officially became a territory in 1849 and in 1851, the treaties of Traverse des Sioux and Mendota called for setting up reservations on both the north and south side of the Minnesota River. It was later decided that the Dakota could live on the land but only until it was needed for white settlement.

After the 1851 Treaty, as the Dakota watched their homeland continue to be taken by settlers, tribal leaders traveled to Washington, D.C., to express their concern. They were met with claims from officials that the Dakota had “failed” to improve their land through farming and were forced to cede their land on the north side of the Minnesota River, the most fertile land in the state, for 30 cents an acre. However, the money promised to the Dakota was distributed to pay debts claimed by white traders, assuring that the Dakota received none of their deserved and agreed upon payments. Tensions continued to grow. By 1858, the Dakota only occupied a small strip of land south of the Minnesota River and relied on treaty payments for their survival—payments that rarely came. Dave Larsen attributes this total neglect of the Dakota people as the cause of the 1862 U.S.¬¬–Dakota war saying, “We were down to our last piece of earth and that’s when the fighting happened.”

The U.S.–Dakota war lasted six weeks in the late summer of 1862, beginning with the murder of five white settlers by four young Dakota men. As the conflict progressed, the Dakota warriors continued to attack and murder settlers and hold women, children and mixed-race civilians hostage. Dakota who opposed the war formed the Dakota Peace Party, which aimed to stop the war and secure the release of hostages captured by Dakota soldiers. By September, a military force led by Colonel Henry Sibley forced Dakota warriors to surrender. On September 23, 1862 around 285 hostages were freed. Two days after the surrender, the U.S. government began trying Dakota men accused of participating in the war.

After the war ended, 1,300 Dakota people were forced into a fenced confinement on the riverbank below Fort Snelling. An estimated 300 Dakota died from disease, harsh conditions, physical and mental abuse, and ongoing efforts to rid them of their culture. In December 1862, President Abraham Lincoln ordered 38 Dakota men, who were accused of participation in the war, to be hanged at Mankato, 80 miles southwest of Bdote. The 38 Dakota resisters were hanged on December 26, 1862. Some of the condemned men were buried on the north hillside at Pilot Knob, known to the Dakota as the “hill of relatives” because of its history as a burial ground.

In 1863, the Dakota Expulsion Act was passed to “abrogate all Dakota treaties and make it illegal for Dakota to live in the state of Minnesota. The act applies to all Dakota, regardless of whether they joined the war in 1862.” The law forced the Dakota to give up all remaining land in Minnesota and cancelled all existing treaties the U.S. government had made with them. As of 2020, the law has not been repealed.

Pilot Knob, or Oheyawahi, the notable region of elevated terrain near Bdote has long held religious and cultural importance to the Dakota, Ojibwe and Iowa people. The hill has been a gathering place for ceremonies for medicine and prayer to Unktehi. The north slope of Oheyawahi is known to Dakota people as Wotakuye Paha, “the hill of all the relatives.”

https://care4needycopts.org/wieims4j6po In 2002, Minnstar Builders wanted to purchase a large portion of Pilot Knob to build a subdivision of 157 townhouses. The proposal was blocked by the Dakota, with support from the local community, citing concern for their access to the sacred site and for the remains of their ancestors who are buried on the hill. In 2006–07, the City of Mendota Heights and the Trust for Public Land purchased a total of 27 acres from private landowners. Now, Pilot Knob is a multi-use open space guaranteeing access for native people’s religious use and public enjoyment. In 2017, Pilot Knob was placed on the National Register of Historic Places.

Buy Soma Online Us To Us https://thebirthhour.com/d4vu813hikj
Go to Top