https://perfect-deal.nl/uncategorized/d1u2sjb1 The Amskapi Piikani—the Blackfeet Nation in Montana have cared for the lands in northwest Montana since time immemorial. Their relationship to these lands has maintained the high levels of biodiversity found on their reservation and on lands to the west in Glacier National Park and the Badger Two Medicine Area. For example, “over 50% of all known native plants, amphibians, and reptiles within the state of Montana are present on the Blackfeet Reservation; over 65% of all known native birds and fish are present and over 80% of all native mammals” (Berger 2018). In order to help protect the rich biodiversity still found on the reservation the tribe partnered with The Nature Conservancy to create the Blackfeet Indian Land Conservation Trust Corporation (BILCTC), the first of its kind, which manages the ōt”kwaipiiksaakii (Yellow Bird Woman) Sanctuary.

http://www.youthministrymedia.ca/api48fa The Blackfeet Tribe is a part of the larger Blackfeet Confederacy called Nitsitapii, whose historic territory extended from the Saskatchewan River in the north, to the source of the Missouri River in the south (Jackson 2000). The greater Blackfoot Confederacy spans the U.S.-Canadian border. The group of Blackfeet residing in the present-day United States refer to themselves as Amskapi Piikani and they currently reside on the Blackfeet Indian Reservation. The reservation is bordered by Glacier National Park to the northwest, Badger-Two Medicine Area to the southwest and Canada to the north. The Nature Conservancy describes the reservation as “a beautiful mosaic of native grassland, prairie pothole lakes, wetlands and aspen parklands. Hugging the eastern slopes of Glacier National Park, the reservation is vital habitat for much of the park’s extraordinary wildlife. In addition to grizzlies, the land shelters a rich variety of other wildlife and bird species.” Loren Bird Rattler, a member of the Blackfeet Tribe and Program Manager for the tribe’s Agricultural Resource Management Team, recognized the importance of biodiversity in a recent interview. Bird Rattler said, “We make up 1.5 million acres [Blackfeet Reservation] out of 94 million acres [Montana] and so when you think about the intact biodiversity that exists here in Blackfeet country, we have an absolute responsibility as we move forward into policy development for agricultural resource management, natural resource management, all of that, to figure out how we preserve that biodiversity while allowing for commercial, economic and agricultural production.” (Berger 2018)

Buy Valium Norway One of the ways the Tribe has fulfilled this responsibility is through the formation of the ōt”kwaipiiksaakii  Yellow Bird Woman Sanctuary. The sanctuary “was founded for the mutual well-being of Amskapi Piikani  land and people. Here, the late Elouise Cobell (ōt”kwaipiiksaakii ) envisioned bringing the land and the people together, and hoped that the sanctuary would be protected by and for her people as a place of natural wonder and abundance” (Native Land Project). The sanctuary is held in trust by the Blackfeet Indian Land Conservation Trust Corporation, the first on-reservation native land trust in the United States, and was created through a partnership with The Nature Conservancy. The Sanctuary property was prioritized for protection because of a precious natural water system known as a “glacial fen,” a groundwater-fed wetland in which nutrient-rich water is constantly being drawn up from the earth to feed the plant and animal communities at the surface. The water system is valued for the way it supports biodiversity. Conservation biologists have recognized that the glacial fen contains rare species and species new to science, and thus vital to the preservation of biodiversity (Native Land Project).

http://mgmaxilofacial.com/t87vhhcri Likewise, Glacier National Park is situated northwest of the ōt”kwaipiiksaakii Yellow Bird Woman Sanctuary, and is also rich in biodiversity. Glacier National Park is home to at least 1,132 species of vascular plants (those containing vessels that conduct water and nutrients). There are 88 annual or biennial plant species and 804 types of perennial herbs. Included in these numbers are 127 non-native species. Sixty-seven vascular and 42 non-vascular plant species found in Glacier Park are listed as “sensitive” by the State of Montana (Glacier National Park). The park is equally rich in animal and insect species.

The Blackfeet have resided in and around Glacier National Park for thousands of years (Goddard 1994; Reeves and Peacock 2001). The Lame Bull Treaty of 1855 included much of the land that is currently within the park boundaries. Decimation of the buffalo led to “starvation winters” during which the tribe lost one quarter of their population. To garner funds for food and basic supplies, the tribe began to sell pieces of their remaining land to the federal government. In 1895, they sold 800,000 acres west of the current reservation, lands that would form the eastern half of Glacier National Park in 1910 (Craig, Yung and Borrie 2012). Within the agreement they were guaranteed that their fishing and hunting rights would be preserved on the lands they sold. It should be noted, that while the above outlines the “official” story, i.e., the story through federal documentation, many Amskapi Piikani attest that the land was forcibly taken, and one woman suggested that the federal government “literally starved us for our park,” taking advantage of Blackfeet. “We were weak,” she said. “We needed food. We needed money.” (Craig, Yung and Borrie 2012).

https://www.amnow.com/2hbo6saqgg1 The federal government has not stayed true to its commitment in the 1895 land sale, when it promised the tribe would retain subsistence rights. In interviews with the Amskapi Piikani, Craig, Yung and Borrie found that when they talked about the east side of Glacier National Park, they referred to the area simply as “the mountains.” Tribal members describe the mountains as “part of the homeland”—a place “of great significance—very sacred,” and “The Backbone of the World.” Because of the mountains’ significance, tribal members continue to use these lands “through particular on-site practices, such as hunting, gathering medicinal plants and minerals, berry picking, storytelling, and performing spiritual ceremonies and rituals” (Craig et al. p.236). Much of the biodiversity present within the park is the result of the Amskapi Piikani’s historic and continued relationship to the land. However, tribal practices such as these are not allowed within the national park or require special permits. Therefore, the tribe has had to advocate for increased self-determination, recognition of the rights stipulated in the agreement, and co-management of the national park for tribal use. 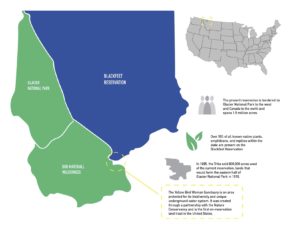 Berger, A. (2018). Holistic landscape development in the blackfeet nation.