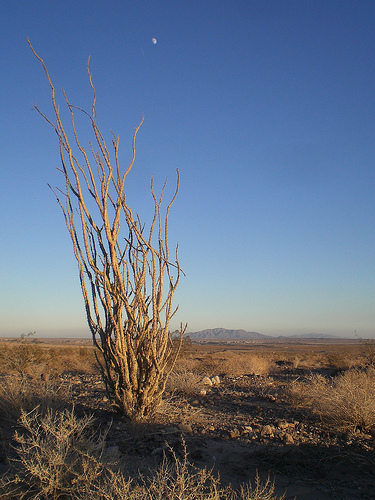 As bulldozers began clearing the site of a new wind-energy facility in the desert of western Imperial County, California — ripping up forests of ocotillo cacti, damaging sensitive wildlife habitat and threatening ancestral graves of the Quechan Tribe — tribal members and their allies stood outside the La Jolla corporate offices of Pattern Energy on May 15, demanding a halt to the project.

“How would you feel if the President proposed a wind project on top of your ancestors’ graves, or on top of the Arlington National cemetery?” Keeny Escalanti, president of the Quechan Tribe of the Fort Yuma Indian Reservation, asked at the La Joya press conference, where the tribe formally announced it was going to court to save its sacred land.

On May 11, the U.S. Department of Interior gave final approval to Pattern Energy’s Ocotillo Wind Energy Facility, granting it a 30-year right-of-way to build and operate the project over nearly 15 square miles. It would be California’s largest wind farm on public land, placing 112 giant turbines alongside the desert community of Ocotillo, at the far southern end of the Imperial Valley.

But the Quechan and other area tribes, including the Viejas Band of Kumeyaay Indians, say the area — which contains at least a dozen cremation sites, hundreds of archeological sites like petroglyphs and geoglyphs, and countless sites of spiritual significance — meets the criteria to be designated and protected as a traditional cultural property under the National Historic Preservation Act. The desert region is also home sensitive plant and animal species, including the endangered Peninsular Bighorn Sheep.

The Quechan Tribe filed a complaint in federal court on May 14, seeking an injunction to stop the project, one of 19 renewable energy projects designated last year by the Bureau of Land Management for “fast-track” approval. The complaint alleges that the Department of Interior, in approving the project, violated several federal laws and regulations, including the National Historic Preservation Act and the land’s designation as a Class L “limited use” area, which is intended to “protect sensitive, natural, scenic, ecological, and cultural resource values.”

Prior to project approval, according to a press release issued by the tribe, “motorized vehicles could only travel on designated roads and it was forbidden to move rocks around. With the stroke of a pen, the area can now be bulldozed to dig foundations 25 to 35 feet deep and 70 to 80 feet in diameter to accommodate 112 wind turbines over 440 feet tall as well as 42 miles of new roads.”

In contrast, the Department of Interior, in its record of decision on the project, said it “sought meaningful consultation with the affected tribes,” and that, in response to tribal concerns, the final project eliminated 43 of the 155 turbines initially proposed, reduced the project area by 2,285 acres, and increased the distance of the turbines from “a number of important resources.” Still, the department acknowledged that the project would “still have an unmitigated adverse effect on resources that are spiritually and culturally significant to the affected tribes.”

For its part, Pattern Energy says it is “committed to building the project in a responsible manner” and that the project’s environmental impact statement “clearly demonstrates that we have designed the Ocotillo Wind Project to minimize impacts on cultural and environmental resources.”

But at the press conference, Escalanti said the final environmental impact statement “does not begin to state the significance this area has for our people, does not contain the voices of indian people.” He continued, “If our concerns were taken seriously, then the administration, which promised a better government-to-government consultation and a better relationship with tribal governments, wouldn’t even think about placing a wind turbine near our cremation sites.”

Escalanti noted that the Quechan tribal council is not opposed to renewable energy. “We believe that the fundamental values underlying renewable energy, such as a harmonious relationship with the earth, are in agreement with our own traditional values.” However, he said the tribe was opposed to the Ocotillo project because it is “unnecessarily leading to the destruction of our cultural resources and heritage.”

Some environmental conservationists and local residents are also opposed to the project. Concerns include threats to plant and animal species and habitats, most notably the authorized “take” (i.e., displacement and even death) of 10 endangered bighorn sheep — five ewes and five lambs — within the project area. There is also the question of the project’s potential benefits: although the Ocotillo Wind Energy project website says the wind farm will be able to power 125,000 homes, the Interior Department’s record of decision sets that number at 25,000.

On May 18, a federal judge heard a motion to consider issuing a temporary injunction to halt construction. That decision is forthcoming. Meanwhile, a train loaded with what appeared to be segments of wind turbines arrived in Imperial Valley on May 20.