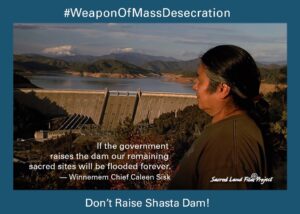 For 25 years we’ve been working with Winnemem leader Caleen Sisk and environmental groups to fight back attempts by the U.S. government to raise the height of Shasta Dam, which would flood—for a second time—the sacred homeland of the Winnemem Wintu south of Mt. Shasta in northern California. Now that the Trump administration has a Westlands Water District lobbyist installed as Secretary of Interior, and has rewritten a 2009 Biological Opinion that called for ecological restoration and salmon reintroduction above the big dams, they are making their move. Who cares if it is against the law? Who cares if it’s a $1.3 billion tax-payer boondoggle that will harm endangered salmon? Who cares if important Winnemem sacred sites will be flooded forever? Well, we all care.

The U.S. Bureau of Reclamation has issued a Draft Supplemental Environmental Impact Statement and the public comment period is open until 5 p.m. PT on Monday, September 21.

Please copy and paste the sample letter below, personalize it, and mail or email to the address listed at the top.

I’m writing to condemn the U.S. Bureau of Reclamation’s Shasta Dam raise project, which violates state, federal and international law. It also represents an act of cultural genocide against the Winnemem Wintu people who have been the Indigenous caretakers of the Winnemem Waywacket (McCloud River) since time immemorial.

In the Bureau’s final Environmental Impact Statement, the agency acknowledged that the proposed dam raise would violate the California Wild and Scenic Rivers Act, which protects the McCloud River from being further flooded by reservoir expansion and makes it illegal for state agencies to assist in the project. This is why the Shasta Superior Court ruled in 2019 that the Westlands Water District could not participate in the proposed raising of Shasta Dam as a funder or as the lead agency conducting the state environmental study, under the state law known as CEQA.

The U.S. Forest Service has also determined that the McCloud River is eligible to be designated as a Wild and Scenic River under the federal act. The Draft Supplemental EIS acknowledges that an 18.5-foot dam raise would inundate a section of the McCloud River that is eligible for federal listing.

The Bureau claims in the DSEIS that it can ignore the state of California’s law protecting the McCloud River from an enlargement of Shasta Lake Reservoir because the dam raise is a federal project and because the McCloud River was never officially added to the list of federally designated Wild and Scenic Rivers. However, once a river is designated as eligible for the Wild and Scenic Rivers Act, federal agencies are required to take actions to protect its free-flowing, historic and scenic value.

Furthermore, in 2016 Congress passed the Water Infrastructure Improvements for the Nation Act (WIIN Act), which also requires the project to adhere to all environmental laws, including the state of California’s Wild and Scenic River Act.

The WIIN ACT also requires that 50 percent of the costs of the dam raise be paid by a funding partner. Currently, there is no funding partner under contract because Westlands Water District, the primary proponent of the project, has been barred from participating due to state law. The Bureau is violating the WIIN Act by moving forward with pre-construction activities and this supplemental EIS.

An ethnographic study by the Stanford Center for Comparative Studies in Race and Ethnicity concluded that the proposed dam raise would either inundate or damage at least 39 Winnemem Wintu sacred sites that are still accessible to tribal members and are integral to their religious and cultural lifeways. The inundation zone for the 18.5 foot raise includes Balas Son (Puberty Rock) and other sacred sites essential to the Balas Chonas (Coming of Age Ceremony for young women), which is a vitally important rite that weaves the social fabric of the Winnemem Wintu community, deepens their connection to their homeland, and imparts teachings for both young women and men about their roles in Winnemem Wintu society.

As their name indicates—winnemem means “middle water”—the Winnemem Wintu people’s culture, religion and worldview are inextricably tied to the Winnemem Waywacket (McCloud River), and further decimation or inundation of their cultural sites within their ancestral watershed represents a cultural genocide.

Under Section 106 of the National Historic Preservation Act, the Bureau is required to consult with the Winnemem Wintu people about the impacts of the proposed dam raise on their historic and cultural properties. However, the Bureau has violated this law by stating erroneously that the tribe has not supplied sufficient information about sacred sites, despite the tribe submitting the Stanford report and other documents, meeting with Bureau officials multiple times on the river, and sending myriad emails and letters.

While the Section 106 process has not been completed with the Winnemem Wintu, the Bureau is also violating the law by moving forward with the project and trying to delay consultation by coercing the tribe into signing onto a programmatic agreement (PA). The PA would allow the Bureau to avoid consulting with the Winnemem Wintu until construction is well underway. PAs are meant for large programs, the impacts of which cannot be determined until individual projects are identified, and are not appropriate for a single project like the proposed dam raise.

Furthermore, when the dam was being constructed during World War II, Congress passed the Central Valley Indian Lands Acquisition Act (55 Stat 612), which promised the Winnemem Wintu compensation for the lands submerged by the dam. The Bureau has never fulfilled its obligations under this law.

The Bureau has been investigating the dam raise project since the 1980s. It is unacceptable that the Bureau has failed after 40 years to fulfill its obligation to compensate the Winnemem for their lost lands more than 75 years after they were flooded out of their traditional homeland, and still refuses to appropriately consult with them.

The Bureau claims the dam raise is necessary to expand the cold water pool in Shasta Reservoir, which is intended to improve Sacramento River habitat for endangered winter-run Chinook salmon. However, the U.S. Fish and Wildlife Service’s analysis, as well as Winnemem Wintu Traditional Ecological Knowledge, has determined the dam raise would not improve conditions for Sacramento River salmon runs. In fact, the Bureau has proven incapable of managing water for fish survival. In 2015-2016, mismanagement of the water chiller device led to 95 percent of the salmon eggs being killed by warm water in the Sacramento River

In fact, a 2009 Biological Opinion concluded that for endangered salmon to survive climate change, they have to be able to access the Winnemem Waywacket and other waterways in the high country above the Keswick and Shasta dams. The proposed Shasta Dam raise would actually damage this potential salmon habitat through inundation and the destruction of about 4,800 acres of riparian habitat.

Planning on the dam raise began more than 30 years prior to the Biological Opinion. The dam raise project was never intended to benefit salmon, and the Bureau’s intentions are clearly to benefit Central Valley water users and brokers.

Furthermore, the $1.3 billion dam raise is an incredible waste of taxpayer money as it is estimated it will only yield about 50,000 additional acre-feet every year, less than 1/10th of 1 percent of California’s water budget. Groundwater recharge, ecological restoration, conservation measures and other types of projects would be more fruitful and cost-efficient in preserving California’s freshwater supply. The additional water from a raised dam would most likely increase water exports to Westlands Water District farms in the San Joaquin Valley, where cultivation of land unsuitable for irrigation has led to thousands of acres of farmland being contaminated with toxic levels of selenium. The toxic runoff from these lands has still not been adequately addressed, and there are even proposals to add this effluent back into the aqueducts that are going south with drinking water for cities.

The U.S. Fish and Wildlife Service also found in its evaluation of the project that the proposed raise would inundate abandoned, uncapped mines in the Shasta region, increasing the load of cadmium, mercury and other toxins in the already “mercury-impaired” Shasta reservoir, which would then be flushed down the Sacramento River. The toxic pipeline this project created has the potential to damage habitats along the length of the Sacramento River and introduce more toxins into drinking water in communities from Redding to Los Angeles.

By a simple inventory of these facts, it’s clear the Bureau and Westlands Water District are pushing this project in order to enrich a handful of wealthy Central Valley agricultural water users and have no qualms about violating the law to do so.

The dam raise also represents a threat to the cultural survival of the Winnemem Wintu Tribe as well as the health and wellbeing of everyone living downstream.

We demand the Bureau permanently suspend this illegal project, finally fulfill their obligations under the 1941 Central Valley Indians Lands Acquisition Act to provide just compensation (preferably like lands to live on) to the Winnemem Wintu, and consult with the Winnemem Wintu to develop a climate change resiliency plan for the Winnemem Waywacket based on Winnemem Wintu Traditional Ecological Knowledge.