How can well-meaning people reconnect to nature in an authentic way that does no harm to indigenous cultures and their sacred places? It may be one of the key questions of our time.

At the very start of a film project, community meetings are key. An outsider proposing to work with native people in sacred places presents a potentially explosive challenge. Listening to elders, teachers, youth, healers and activists is the essence of free, prior and informed consent—and I’ve spent a fair amount of time listening over the years. In dozens of such meetings, in all parts of the world, when I ask about the biggest concerns that indigenous communities have in terms of threats to their sacred sites, “New Agers” are right up there at the top of the list next to mining, dams and land grabs.

Certainly this is true with the Winnemem Wintu at Mt. Shasta, where the Harmonic Convergence of 1987 opened a floodgate that continues to generate a torrent of visitors. At first it was expensive sweat lodges and vision quests with crystals left all over the mountain and in an important sacred spring. Now it’s cremation remains. Responding to this very serious concern led to a memorable scene we filmed for In the Light of Reverence up in Panther Meadows as drum-beating, crystal-packing college students ‘loved’ the place to death. 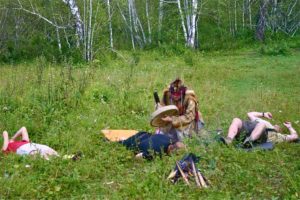 In Standing on Sacred Ground we were able to illustrate the same problem on the other side of the planet, when a self-styled European shaman brought (high) paying customers to the most sacred mountain in Russia’s Altai Republic, Mt. Belukha, for a healing ceremony. These scenes of cultural appropriation often produce an uncomfortable feeling for film viewers. So, how are outsiders supposed to visit sacred places? Is there any way that is appropriate?

If I can try to sum up what I have been told over the years… Universally, indigenous people work hard to fulfill cultural instructions for the spiritual care of homelands and special places. These traditions are rooted and cannot be moved to another place—or sold or copied. Centuries of racism and violence resulted in invisibility for these cultures, traditions and sacred places on one side, and blindness and denial on the colonizer side. Then, along comes a generation that wants to reconnect with nature and explore the spiritual dimensions of land, water, sky, ancestors, plants and animals. Certainly, there are all levels of “seeking re-connection,” but far too many are offensive to native people. Why? What defines appropriation that is disrespectful and dangerous? As Vine Deloria said in our film interview, “It’s a serious dilemma.” 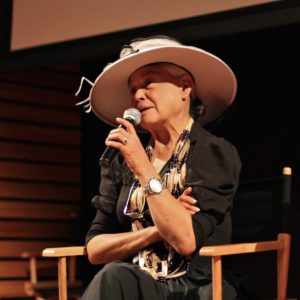 Every year, California hosts PantheaCon, a gathering of a couple thousand pagans. This year I was invited by Sara Moore and Gwen Turner to show film scenes and organize a dialogue about New Age appropriation of indigenous spirituality and to discuss protocols for visiting sacred places. Ohlone elder Ann Marie Sayers courageously joined me—along with Rachael Watcher and Don Frew of Covenant of the Goddess—for what was a very productive, very respectful conversation. We hope to repeat it for a larger audience at PantheCon 2017. Here is some food for thought, offered during the dialogue by Ann Marie Sayers:

Contrasting Value Systems:  “One time I went to a sweat lodge led by a non-native, and I had to leave. It was all self-help. Our ceremonies focus on helping the community” — and community includes ancestors, future generations, animals and plants.

Defining Sacred Sites: “I’ve asked many indigenous people the meaning of sacred sites. The common denominator is: A place that creates balance and energy and is important to keep energy flowing and balance Mother Earth. These places call for humility and respect.”

Truth in History: “It’s important to learn the stories of the place you’re in. What treaties are being broken? What’s the active injury right now?” Ann Marie’s daughter, Kanyon, asked allies to advocate for “truth in history.”

Ancestral Roots: When someone suggested each person should “explore your own tribal roots and learn about your ancestors,” Ann Marie commented, “It’s like a language. You don’t lose language. It can go dormant. But none of you has lost your heritage. Ask your ancestors to help you connect.”

Offer Tobacco: As a basic practice, Ann Marie suggested people offer tobacco and speak aloud to the ancestors. Her prayer: “Ancestors on whose land I stand, please guide me so that my words and actions will honor you—in a way that helps our Mother Earth.” 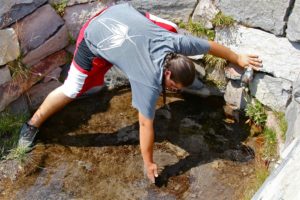 With great thanks to Ann Marie, I look forward to continuing this important dialogue.

Photo at right shows Jesse Sisk of the Winnemem Wintu cleaning the sacred spring on Mt. Shasta to remove cremation ashes and bone fragments before a ceremony can begin. It’s illegal, it’s wrong, and it’s horrible.

We have set up a YouTube Playlist page with the video clips we screened at the PantheaCon gathering, plus a bonus scene about the Harmonic Convergence at Chaco Canyon that we shot in 1997 for In the Light of Reverence but were not able to include in the film.

Beginning with the Harmonic Convergence, another sacred place—Chaco Canyon, home to ancient Puebloan villages and Great Kivas—has been overwhelmed with inappropriate offerings left by New Age practitioners. While filming In the Light of Reverence, we met archaeologist Wendy Bustard, the National Park Service curator at Chaco Canyon. Park Service staff have to clear away the offerings and catalog and store everything in the Chaco collection. Bustard spent a day with us, displaying an array of New Age offerings and reflecting on why they’re considered offensive by native people. Here’s the scene we weren’t able to include in the film.