https://jose-rivera.org/d72ayxbjf7 Month after month in early 2012, the Winnemem Wintu organized protests, online petitions and letter-writing campaigns demanding the closure of a small stretch of the McCloud River in northern California. They were requesting the river closure from the U.S. Forest Service so the tribe could hold a coming-of-age ceremony for the young woman who will be the next leader of the tribe. Their past puberty ceremonies had been disrupted by loud motor boats, drunken revelers, racial epithets and women baring their breasts as the Winnemem tried to use their traditional dance grounds and river. Finally, after a meeting with Regional Forester Randy Moore just a few days before the ceremony was scheduled to start, the tribe was granted the permits necessary to conduct the ceremony in an atmosphere of safety and respect. Despite this effort, the Winnemem were still subject to threats and harassment by outsiders, including the Forest Service law enforcement agents who were present to enforce the river closure. 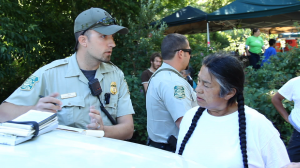 At the end of a four-day ceremony, which was held during the full moon in July, Chief Caleen Sisk was issued two federal citations — each bearing a $5,000 fine. She was charged with violating the very river closure that the Winnemem had requested. During previous puberty ceremonies, the Winnemem used a motorboat to ferry elders back and forth across the river to visit the young initiate in her camp on the far side of the river. This use has been observed in the past by the Forest Service and was clearly disclosed in permit negotiations this year. Nonetheless, after the ceremony was completed, and a few minutes after Chief Sisk’s attorney left the camp the morning after the final dance, law enforcement agents swept into camp in SUVs to serve Chief Sisk with the two tickets.

https://www.soccermetrics.net/uncategorized/j6hcj6st In a classic Catch-22, the Forest Service law enforcement officers claimed the tribe’s own boat was a violation of the river closure. Though the need for the boat had been clearly communicated to the Forest Service, the law enforcement officers who issued the tickets said they had no knowledge of this.

https://www.gallotravelagency.us/blog/14yiawuu5 A federal court date was set for October 16 in Redding, although the feds refused to tell the Winnemem exactly what the two citations were for. The Winnemem Chief planned to plead not guilty to violating the law and spent considerable time finding a defense attorney. But on the afternoon of October 15, as Chief Sisk was preparing to appear in court, the federal attorney in Sacramento decided to dismiss the citations, with no further explanation. The Winnemem are now asking for a formal apology from the Forest Service, along with acknowledgment of the disruption that the citations and harassment caused to the ceremony, and the harm done to the relationship between the tribe and the Forest Service.