Xanax 1Mg Order In Australia’s Northern Territory, Fish River Station protects a stretch of the biodiverse Daly River, where fresh and saltwater crocodiles swim in billabongs bordered by rainforest and savanna woodland. A variety of fish, including barramundi and the threatened freshwater sawfish and whipray make their home in the river. Fish River Station’s wetlands provide habitat to seven freshwater turtle species. Two hundred and fifty-five animal species have been recorded on the land, including threatened species such as the northern quoll, Gouldian finch, northern masked owl and partridge pigeon. A small monsoon rainforest is habitat for rare birds such as the rainbow pitta, orange-footed scrubfowl, emerald dove and rose-crowned fruit-dove. The pig-nosed turtle is an important food source and cultural symbol for local Aboriginal people, who once again manage this cultural landscape.

Fish River Station illustrates how indigenous-owned and managed land, and traditional ecological knowledge can enable large-scale conservation and biodiversity protection. The station is a large 440,134 acre property located on a stretch of the spectacular Daly River in the Northern Territory south of Darwin. The tropical savanna environment was formerly run as a cattle property by Australian colonists, but its original inhabitants were the Ngan’giwumirri (Labarganyin), Wagiman, Malak Malak and Kamu peoples. The land was purchased in 2011 with funding from the Indigenous Land Corporation, Caring for our Country, The Nature Conservancy and Pew Environment Group and is part of Australia’s National Reserve System. It is held in a trust agreement between the Indigenous Land Corporation and Greening Australia, to eventually be given to an indigenous organization for long-term care. Fish River Station now operates as a carbon-credit generating conservation reserve.

https://poweracademy.nl/bioq0sm24 Australian carbon credit units, which can be bought and sold, are produced through “carbon farming,” by carrying out controlled burns in savanna areas. Indigenous rangers conduct the burns at Fish River Station and also run the management of the station itself. The early-burn fire management method produces half the greenhouse gas emissions that would be emitted if the land caught fire in the drier late season. By creating early season fires, Fish River Station limits the number of late season fires and reduces carbon emissions overall. During the years when the fires were not managed, late dry season fires burned 36 percent of the area. After the Indigenous Land Corporation began managing the land in 2012, the late season fires occurred in only one percent of the area. This project is anticipated to continue to decrease CO2 emissions by 13,000 tons each year, making a positive contribution to the challenge of tackling climate change. After two years of carbon farming from 2011 to 2012, the carbon units were sold for $500,000 AUD to Caltex (Chevron Australia).

https://flowergardengirl.co.uk/2022/09/14/4i6c04884yt The Fish River Station is generating revenue for the local indigenous communities and is paying Aboriginal rangers to practice traditional methods of fire management. This provides meaningful employment for indigenous people to both work on and manage their own traditional land. It provides many cultural and economic benefits to the community. Two thousand indigenous people from the Daly River area have direct and indirect access to the Fish River Station property and 22 areas have been protected for resources or for cultural value. There are myriad ways in which the property is used that also have non-marketable value.

https://childventures.ca/2022/09/14/5g9fit46x Tropical savannas are areas located between tropical rainforest and desert areas. Savannas comprise one-third of terrestrial ecosystems in Australia, Africa, South America, South-East Asia and India. Since sufficient research has not been done on the ecosystem services that savannas provide, their benefits to the inhabiting communities, to culture, and to biodiversity have often been overlooked. Indigenous communities in Australia have greater access to land in northern Australia, where the land is primarily savanna, but because of the lack of research ecosystem services and benefits that come with land cannot yet be adequately valued. This research gap urgently needs to be filled—in northern Australia, savannas comprise one-fourth of the total land, crossing Western Australia, the Northern Territory and Queensland. Thus, tropical savannas sustain 120 communities and deliver ecosystem benefits to 500,000 non-indigenous people across the region (17 percent of the population in this region is indigenous).

http://mgmaxilofacial.com/k5tvah7 Several studies have called for further development of carbon offset programs for indigenous communities (Robinson 2016, Sangha 2017). A paper published in 2017 by Conservation & Society estimates a well-being value framework that provides an estimate of the value of socio-cultural benefits of land use, similar to the market value assessment of ecosystem services. Capability to learn traditional knowledge, skills that must be taught on land, is also factored into this framework. This study finds a monetary value to indigenous ecosystem services and socio-cultural benefits that can be used for cultural protection in government policy, similar to the value that is given to ecosystem services for making policy in environmental protection. Further expansion of programs similar to Fish River Station, and expansion of the value of such programs, are being encouraged to maintain and develop opportunities for indigenous well-being, strengthened cultural practices and conservation. 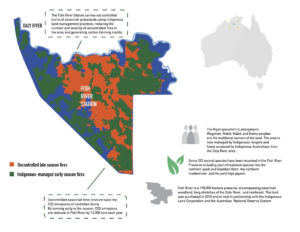