Winding 1,560 miles across northern India, from the Himalaya Mountains to the Indian Ocean, the Ganges River is not a sacred place: it is a sacred entity. Known as Ganga Ma—Mother Ganges—the river is revered as a goddess whose purity cleanses the sins of the faithful and aids the dead on their path toward heaven. But while her spiritual purity has remained unchallenged for millennia, her physical purity has deteriorated as India’s booming population imposes an ever-growing burden upon her. The river is now sick with the pollution of human and industrial waste, and water-borne illness is a terrible factor of Indian life. But the threat posed by this pollution isn’t just a matter of health—it’s a matter of faith. Veer Badra Mishra, a Hindu priest and civil engineer who has worked for decades to combat pollution in the Ganges, describes the importance of protecting this sacred river: “There is a saying that the Ganges grants us salvation. This culture will end if the people stop going to the river, and if the culture dies the tradition dies, and the faith dies.”

In a country where practically everything in nature is venerated, the Ganges is most holy. Considering the magnitude of her life-sustaining force, it’s no wonder: her mighty course from the mountains to the sea creates a river basin 200 to 400 miles wide that supports nearly half a billion people. According to Hindu mythology, the Ganges was once a river of heaven that flowed across the sky. Long ago, she agreed to fall to earth to aid a king named Bhagiratha, whose ancestors had been burned to ash by the angry gaze of an ascetic they had disturbed during meditation. Only the purifying waters of Ganges, flowing over their ashes, could free them from the earth and raise them up to live in peace in heaven. So that the earth would not be shattered by the impact of her descent, Lord Shiva caught Ganges in his hair as she cascaded down from heaven to the Himalyas. Ganges then followed Bhagiratha out of the mountains, across the plains to the sea, where she restored his dead ancestors and lifted them to paradise.

As the Ganges brought to life the ashes of Bhagiratha’s ancestors, so all Hindus believe that if the ashes of their dead are deposited in the river, they will be ensured a smooth transition to the next life, or freed from the cycle of death and rebirth. Hindus may travel great distances to scatter the ashes of loved ones in the Ganges. Hindus also believe that the Ganges’ divine waters purify those who immerse themselves in her. It is even said that a single drop of Ganges water, carried by the wind over a great distance, can cleanse a lifetime of sins. In cities along the river, daily dips are an important ritual among the faithful. Many cities are considered sacred and serve as pilgrimage sites: Gangotri, where the river originates from a glacial cave; Sagar Island, where the Ganges drains into the sea and once restored the ancestors of Bhagiratha; Varanasi, the holiest of cities along the river’s course and the most auspicious place to die; and Allahbad, the site of the most important festival in the Hindu religious calendar, Kumbh Mela. In 2001, some 20 million people bathed in the Ganges at Allahbad at the most auspicious moment of this festival. 30 million bathed in the Ganges at Kumbh Mela in 2013.

The tremendous life that the Ganges supports is also the source of its greatest threat: pollution. The majority of the Ganges’ pollution is organic waste—sewage, trash, food, and human and animal remains. Over the past century, city populations along the Ganges have grown at a tremendous rate, while waste-control infrastructure has remained relatively unchanged. Sewage systems designed near the turn of the 20th century today do little more than channel waste into the river. Some 800,000 gallons of sewage flow into the Ganges each day, one third of that is treated, and the effects are stunning: recent water samples collected in Varanasi revealed fecal-coliform counts of about 60,000 bacteria per 100 milliliters of water, 10,000% higher than the government standard for safe river bathing. The result of this pollution is an array of water-borne diseases including cholera, hepatitis, typhoid and amoebic dysentery. An estimated 80% of all health problems and one-third of deaths in India are attributable to water-borne diseases.

The sacred practice of depositing human remains in the Ganges also poses health threats because of the unsustainable rate at which partially cremated cadavers are dumped. In Varanasi, some 40,000 cremations are performed each year, most on wood pyres that do not completely consume the body. Along with the remains of these traditional funerals, there are thousands more who cannot afford cremation and whose bodies are simply thrown into the Ganges. In addition, the carcasses of thousands of dead cattle, which are sacred to Hindus, go into the river each year.

While industrial pollutants account for a smaller proportion of contamination in the Ganges, the health and environmental impacts of toxic chemical waste can be far greater. From the plains to the sea, pharmaceutical companies, electronics plants, textile and paper industries, tanneries, fertilizer manufacturers and oil refineries discharge effluent into the river. This hazardous waste includes hydrochloric acid, mercury and other heavy metals, bleaches and dyes, pesticides, and polychlorinated biphenyls—highly toxic compounds that accumulate in animal and human tissue. Runoff from farms in the Ganges basin adds chemical fertilizers and pesticides such as DDT, which is banned in the United States because of its toxic and carcinogenic effects on humans and wildlife. Damming the river or diverting its water, mainly for irrigation purposes, also adds to the pollution crisis. Rivers need fresh infusions of water to dilute and dissolve pollutants, and water flow is necessary to flush material downstream.

In 1985, the government of India launched the Ganga Action Plan, which was devised to clean up the river in selected areas by installing sewage treatment plants and threatening fines and litigation against industries that pollute. Almost 20 years later, the plan has been largely unsuccessful. The Western-style treatment plants simply did not meet the needs of the region. Such treatment facilities are designed for use in countries where the supply of electricity is stable, there’s no season of overwhelming monsoon rains, and the population doesn’t drink directly from the water source. Many Indians blame the plan’s failure on mismanagement, corruption and technological mistakes. A key criticism is that local communities, those most invested in the health of the river, were not included in the planning process. 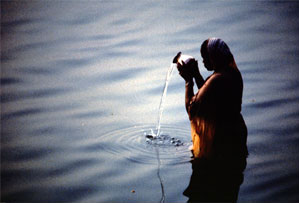 In contrast to the shortcomings of the government’s Ganga Action Plan, the citizen-based Sankat Mochan Foundation, started in Varanasi in 1982, has made great strides toward a lasting clean-up of the Ganges. With a dual identity as Hindu priest and civil engineer, the organization’s founder, Veer Bhadra Mishra, approached the problem from both a scientific and a spiritual perspective. In collaboration with engineers at the University of California, Berkeley, Mishra proposed an alternative sewage-treatment plan for Varanasi compatible with the climate and conditions of India. The advanced integrated wastewater oxidation pond system would store sewage in a series of ponds and use bacteria and algae to break down waste and purify the water, so it wouldn’t need electricity.

Just as important as V. B. Mishra and the foundation’s work to develop a practical scientific solution to cleaning the Ganges was their work to incorporate Hindu culture and tradition in the clean-up. They found new ways to talk about the river that respect the Hindu worldview and veneration of the Ganges. According to Mishra’s view, to tell a Hindu that Ganga, goddess and mother, is “polluted” or “dirty” is an insult; it suggests that she is no longer sacred. Rather, the approach must acknowledge that human action, not the holy river herself, is responsible: “We are allowing our mother to be defiled.” This approach has stimulated grassroots involvement in the clean-up effort, and is transforming the work for environmental preservation into a model for cultural and religious preservation as well.

Sankat Mochan’s cleanup program, called Campaign for a Clean Ganga, has achieved tangible results. For example, workers in Varanasi now pick up litter along the riverfront and remove corpses and animal carcasses from the river. Despite the achievements in Varanasi, the clean-up campaign must be a national effort, touching all parts of the river, if it is to be successful. To this end, Campaign for a Clean Ganga launched a program in 2002 to raise national awareness, empower local communities to take charge of environmental issues, and build national coalitions of NGOs, industries and local governments. In March 2003, the program organized the first national Clean Ganga Day in Calcutta, the first in a series of workshops for civic leaders and the general public.

Major programs and initiatives of the foundation include a research laboratory to monitor the river’s water quality, an environmental education center that combines traditional beliefs and practices with ecological education, and a program which assists villagers in securing access to clean water.

In November 2008, the Ganges received the designation of “National River,” the only river in India to receive such a title. The move also facilitated the creation of a National Ganga River Basin Authority aimed at implementing measures to protect the river.

Despite the best efforts of activists, the river remains polluted. In response to illegal mining in the Ganges for stones and sand to use as construction material (a longstanding problem in Haridwar district), Uttarakhand Swami Nigamanada, a 34-year old monk began fasting in February 2011 to protest the mining. He died from malnourishment at a hospital after 115 days of fasting.

Veer Bhadra Mishra passed away at the age of 74 in 2013, and his son Vishwambhar Nath Mishra his now president of the Sankat Mochan Foundation.

However, there is new hope for restoring the Ganges to health with Narendra Modi’s election as India’s prime minister. Known for cleaning a 10.5 kilometer stretch of the Sabarmati River, Modi made a promise the day after his election to restore the sanctity of the Ganges. Modi has expand the role of the Water Resources Ministry to conduct “Ganga Rejuvenation” and appointed a minister who has been a strong voice calling for halting pollution of the river.