The holy site or wahi pana of Haleakala Crater is known to native Hawaiians as the “House of the Sun.” Located on the southeastern reach of Maui, the second largest of the Hawaiian Islands, the sacred crater and summit are where ancient priests or na Kahuna Po‘o have received spiritual wisdom and practiced meditation for over 1,000 years. Today Haleakala is managed as a national park, and the summit, with an altitude of 10,023 feet, has become one of the most important astronomical research sites in the world. The University of Hawai‘i Institute for Astronomy operates the 18,166-acre High Altitude Observatory Site and is now building the 14-story Advanced Technology Solar Telescope. This presence and expansion of the university’s operations on Haleakala has stirred conflict between Native Hawaiians and the scientific community. Mikahala Helm, treasurer of Kilakila o Haleakalā (Majestic is Haleakala), a local organization that opposes the project, writes in the group’s website, “Haleakala is precious, and it is an integral part to our identity as Hawaiians and to our culture. The price to our Hawaiian people and the impact on our culture and our personal identity would be devastating.”

https://partyhosthelper.com/ft0asch The House of the Sun figures in many stories that continue to strengthen the connection between the earth and its people for native Hawaiians. As one story goes, the demigod Maui journeyed to the crater where the sun was asleep and, using his lasso, caught the sun and made him promise to move more slowly through the sky, thus creating the long summer season. Native Hawaiians respect and honor the sun’s energy as the source of all life and continue do so by praising its existence from various sacred locations on the rim of Haleakala, whose ancient name, Ala hea ka la, signified “the path to call the sun.” Some Hawaiians also view Haleakala as a physical manifestation of the goddess Pele. In ancient times only priests were able to walk on the summit because it belonged to the gods, who resided all around the mountain.

https://pastiebap.com/site-news/l9yzie6m484 The summit and crater area of Haleakala is a sacred site to Native Hawaiians, who have always been against construction of the observatories. In the early 1960s, Hawaiians led peaceful protests at the state capitol in Honolulu, opposing the observatories and insisting that the mountain belonged to everyone—not just astronomers. Their demands went unheard. By 1977, according to the organization Kilakila o Haleakala, six observatories had been built atop Haleakala. Haleakala officially resides on “ceded” land. There is no clear title because these lands originally belonged to the Hawaiian Kingdom until they were turned over to the United States during the 1898 annexation. The nearly 1.8 million acres of land then passed into state possession when Hawai‘i officially became a U.S. state in 1959; however, proper ownership of this land has still never been fully addressed.

Buy Xanax Prescription Online Haleakala National Park, which today encompasses 30,183 acres, draws nearly 1.7 million visitors annually. Originally part of the Hawai‘i National Park established in 1916, it became a separate national park in 1961 and was further designated as an International Biosphere Reserve in 1980. The park’s code of federal regulations prohibits the “walking on, climbing, entering, ascending or traversing of archeological or cultural resources … with the exception of Native Hawaiians conducting traditional cultural practices.” The park is a treasure of biodiversity and prides itself on stewarding Maui’s native plant and animal species despite many threats from nonnative invasive species. According to the National Park Service, a visitor driving the two hours to the summit of the mountain passes through as many ecological zones as one would on a journey from Mexico to Canada.

https://www.angelinvestmentnetwork.net/byncqes In January 2005, Haleakala was announced as the preferred site, among 70 under consideration, for the Advanced Technology Solar Telescope. As the national park is a vital cultural and economic resource for the island and state, the proposed telescope became a controversial issue statewide. The Institute for Astronomy constructed the Haleakala High Altitude Observatory Site on the summit of Haleakala in 1964. Now commonly referred to as Science City, the University of Hawai‘i leases their acreage at no charge to the Federal Aviation Administration, U.S. Air Force and Department of Energy, and shares their facilities with NASA.

The Advanced Technology Solar Telescope—the largest solar telescope in the world—will study magnetic field lines and the sun’s influence on the earth’s climate. The telescope will be 14 stories high and five stories deep, requiring a 40-foot excavation. Intrusive foundation digging will last for an 18-month period while an estimated 450 cement trucks travel up and down Crater Road, making it impossible to respect Hawaiian religious ceremonies during this time. When completed, the telescope will be the tallest building on Maui, visible from many parts of the island, obscuring critical views and—according to Native Hawaiians who frequent the site for sunrise and sunset practices—posing a disruptive force on the spirit or mana of Haleakala. These meditative rituals are dependent upon the views and the connection with the earth and sky. In addition, many community members are concerned about the potential threats that the telescope’s construction poses to native cultural artifacts and burial sites within the crater and around the summit.

Conservationists consider Haleakala to be one of the most threatened parks in the U.S. National Park System, as it is the natural habitat of more endangered species than any other national park, including the only seabird on the U.S. endangered species list. The Hawaiian Storm Petrel or ‘ua‘u, sacred to many Hawaiians as an ancestral guardian spirit or ‘aumakua, has its nesting grounds throughout the park, including in burrows in the lava at the summit and in areas in close proximity to the proposed telescope sites. Kiope Raymond, senior faculty member in Hawaiian studies at Maui Community College, a board member of Friends of Haleakala and president of Kilakila o Haleakala, is fighting for this endangered seabird because there is concern among ecologists that the petrel’s burrows could collapse from construction noise, vibration and human proximity while the foundation for the telescope is under construction. 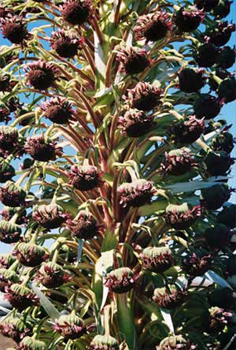 Activists like Kealoha Pisciotta, president of Mauna Kea Anaina Hou, an organization on the Big Island of Hawai‘i that fights for the protection of the sacred Mauna Kea volcano, have expressed concern due to the similarities between the university observatories at Mauna Kea and Haleakala—which both have a unique alpine desert environment that, as past experience has shown, can be negatively impacted by the building of large structures. Already at Mauna Kea, there have been sewage and chemical spills, including one involving mercury. The grading of cinder cones and accumulation of trash and windblown debris are evidence of the degradation of its fragile native ecosystem, and there is also concern for groundwater resources.

According to opponents of the current telescope project, the draft environmental impact statement, released in September 2006, did not adequately address these and other potential adverse effects on Haleakala’s summit and crater area. Haleakala National Park is opposed to the telescope project, and its director, Marilyn Parris, told the Haleakala Times: “It’s the National Park’s contention that this [impact assessment] falls far short in adequately evaluating the numerous cumulative adverse impacts on the park’s resources, our visitor experiences, and overall park operations.”

In May 2007, a Supplemental Cultural Impact Assessment was released, which sought to assess cultural effects and gauge community response to the project. According to the published report, “[T]he overwhelming evidence, from a cultural and traditional standpoint, points toward a significant adverse impact on Native Hawaiian traditional cultural practices and beliefs.” It found that the majority of Native Hawaiians and non-Hawaiians who participated in the public-comment sessions were opposed to the project. The report, however, stopped short of advising against the project, saying, “In the event that the proposed undertaking is approved and funding secured, it is highly recommended that more time for mitigative proposals be allotted and the development of working relationships with Native Hawaiian groups be actively pursued.”

https://www.greenlifestylemarket.com/2022/11/17/wx7sjagx The Advanced Technology Solar Telescope represents a collaboration of 22 institutions, with the National Solar Observatory leading the effort. After many years of environmental impact assessments, in December 2010 the telescope received a construction permit issued by the state Board of Land and Natural Resources (BNLR). Although legal challenges to the project were brought forward by Native Hawaiian groups, in 2012 BNLR reaffirmed its decision, which Kilakila appealed in court. The project agreed to make concessions in return for construction, including hiring a cultural specialist, requiring construction workers to participate in “sense of space” training, building a shrine and employing a staff biologist to monitor the nesting place of endangered ‘ua‘u that reside in the area. Construction is currently underway.

Keep abreast of developments regarding the telescope project, as well as general conservation issues, by visiting the Friends of Haleakala National Park and Kilakila o Haleakala web sites.

https://gloriag.com.ar/1bienx1l Read our sacred site report on the Thirty Meter Telescope controversy on Mauna Kea on the Big Island of Hawai‘i.