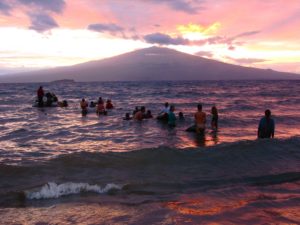 As our films head for PBS broadcast in places like Honolulu, it is heartening to continue to cultivate the relationships that led to the film stories being told. Collaboration with the Protect Kaho`olawe `Ohana has been rich and rewarding—and the process continues. Over the past year, the PKO has used our Kaho`olawe film segment in communities around the islands as an introduction to “vision meetings” where people explore the future of the island, so badly scarred by years of overgrazing and bombing by the U.S. Navy.

How to heal and take care of a sacred place for future generations?

As mentioned in the film, a crisis is looming: how to pay for the continued restoration and maintenance of the island? Transportation, scientific monitoring, law enforcement, unexploded ordnance removal (when bombs surface, which they do), erosion control, seeds and plants all cost money.

The federal funds that were used for the clean-up provided an initial budget for the Kaho`olawe Island Reserve Commission (KIRC), but those funds have now been almost totally spent. By this coming July, just $1.2 million will remain, less than half of the KIRC’s annual budget, and funds will run out by year’s end. So the state of Hawai`i is looking at whether and how to provide funding. Most crucial is the question: what strings will legislators attach to the money? Will Hawaii’s politicians share the vision for Kaho`olawe developed by the people who have lived and died for the island for 40 years? The state Senate and House are considering allocating $6 million for the next two years, with the funds to come from the state general fund. But, as usual, the devil’s in the details.

Some lawmakers want to amend the charter governing the island to allow “limited commercial use.” PKO leaders want to draw the line at continuing to allow “revenue generating” activities, such as use and access fees. Letting the money run out would be a crime, with 1.9 million tons of soil continuing to flow off the island into the sea every year. Commercial activity on the island would undermine all that has been achieved.

Auditors and critics can attack the KIRC for failing to restore more of the island, and for depleting their limited funds. But no less than the U.S. Congress and the U.S. Navy failed miserably to estimate how much it would cost and how long it would take to clear the weapons of war and make the island 100% safe. They didn’t come close. And this is an historic, internationally significant place, a sacred place, let alone the first land set aside for a future sovereign Hawaiian government. It’s priceless. Period. Let Kaho`olawe be a shining success story of activism, cultural revival and healing without forcing commercialism down the throat of the heroes who fought for it. Keep the casinos and wind farms seven miles (or more) away. Let the island continue to be a natural and cultural refuge of experimentation and inspiration, of low impact living, of ancient cultural values like aloha aina, of living with the untamed wind, always keeping an eye on hokulea, the north star.

The Hawaiian legislature should commit continuing annual funding to restore Kaho`olawe, with no strings attached.

Check out the I Ola Kanaloa Strategic Plan to follow the evolution of the vision for Kaho`olawe’s future.