A Hopi Messenger — Prophecy or Prediction?

On a dark mountain road the wind is howling. Is it angry? Power lines pass through tree limbs stressed by five years of California drought but now growing as fast as they can after one winter’s deluge. The power lines cannot hold against the fury of the trees and wind. Sparks. Then more sparks in a stream. Ignition. A wild fire roars into town.

The power lines connect all the way back to Black Mesa in Arizona, where the Peabody Coal stripmine sends colonizer juice to distant cities whose citizens have no idea where their power (or water) come from, let alone the karma associated with megamachines ripping up the earth, the juniper, the eagle nests, the sacred springs, and the burials — “so far away.” 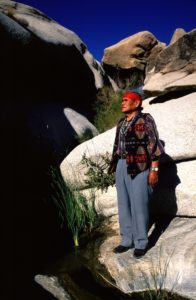 Northern California burns as I write. Las Vegas grieves. Puerto Rico and Houston and even New Orleans still stagger to rebuild. Does anyone ask why?

For twenty years I worked with the late Hopi elder Thomas Banyacya, Sr. (1909-1999) to expose the travesty of that Peabody coal mine. It was an education in racism, corruption and environmental injustice. I heard Thomas issue many warnings, struggling to explain in English what the Hopi elders he represented wanted him to say. He called it “Hopi Prophecy” and he used many words (see below) to describe the price humanity would ultimately pay for desecrating the Earth and her indigenous caretakers.

Not long after we met in the late 1970s, I told Thomas that the Dalai Lama was coming to the United States for the first time. Has anyone set up a meeting? “No,” said Thomas. Do you want me to make a phone call. “Yes.” So, I called the Tibet Office in New York and said I was calling for Hopi elders. “We have been waiting for you to call,” came the reply. 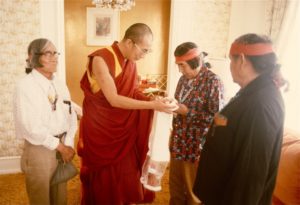 A couple weeks later, in Los Angeles, I followed four Hopis into a suite in the Beverly Wiltshire Hotel. The Hopi were scheduled for a 15-minute meeting with His Holiness. I got to watch a warm embrace, an exchange of gifts, and I took a few memorable photos before being ushered out. Ninety minutes later, the door opened and I swear golden rays of light emanated from the room.

Tommy Banyacya Jr. was in the meeting and years later I asked him what they talked about. He said that the Dalai Lama was critical of Hopi prophecy, saying that it’s impossible to know the future. Certainty removes human free will to change for the better through compassion. Besides, an inevitable apocalypse is depressing and dispiriting.

These days Tommy Jr. explains to visitors at his home — as the elders explained to the Dalai Lama — that Hopi warnings are not a prophecy, but predictions based on knowledge of human nature and the history of previous worlds destroyed by hubris. It’s an intuition based on centuries of careful observation of nature and people.

I called Tommy last month to ask permission to post a short film we made a few years ago about his father, and again the subject of prophecy came up in the context of climate change. He said, “These are predictions based on how people evolved and Hopi knowledge of past human mistakes and consequences. Prophecy can’t be altered. But if you understand human nature the way Hopi do you can predict the future. Being off the path of natural order results in distractions and imbalance. My dad learned English at Macon College, so his translations and the words he used were biblical, had a Christian tinge. That made it sound apocalyptic and brought in the word ‘prophecy,’ which isn’t the right word. It’s not an inevitable end.”

Lately I’ve been writing about decades of experience at Hopi — turns out I have made 36 trips there over 40 years — and I went through the transcripts of four interviews I did with Thomas Banyacya, Sr. over the years. At a moment that feels deeply apocalyptic, I wanted to find “the best quote” about nature’s inevitable wrath in response to human disrespect. I found each version uniquely expressive, worth pondering, and so I collected a list of Thomas’s words — prophecy or prediction? You decide: 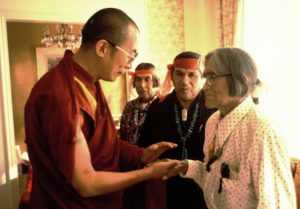 “The world is going to be destroyed by nature again.”

“We will suffer a great many dangerous things that we ourselves create.”

“A tornado or hurricane is going to wipe out that eastern area in a few seconds.”

“They are going to suffer terrible things, earthquakes, flooding, tornadoes, upheaval of land, tidal waves, because we have not corrected and changed things.”

“If you don’t, then nature is really going to take over — earthquakes, flooding, tornadoes — or somebody’s going to throw a bomb over here.”

“Nature is going to be very active.”

“Nature is going to be very active soon.”

“Nature will take over.”

“Earthquakes, flooding, tornadoes are telling us, animals are telling us, whales came into San Francisco Bay twice to tell people: ‘The ocean is so polluted, we can’t live there any more,’ but people don’t understand why they came into the bay. Rivers are polluted. You can’t drink from springs. You have to carry water to drink.”

“It seems that humans always destroy the world.”

“We are going to have more earthquakes, more flooding, tornadoes, upheaval of land, sinking of great areas of land, tidal waves so destructive, and hail that is small but getting bigger and bigger. All this will let us know we are getting closer to some very important event.”

“This land may start to shake us up, earthquakes, tornadoes, flooding and great winds, so destructive. We will know that those events are indicating that we are coming to something bigger.”

“The American people, because of money, guns and police, army, they think they have power, but sooner or later you will see, big nature’s going to take over, earthquake, flooding, you won’t have any power.”

“Mother Earth is going to really be mad and angry.”

“Those are the instructions that the Great Spirit told us. That’s why we know that if we do things wrong then you have terrible droughts, tornadoes, sand storms, hail storms, flooding, earthquakes.”

“They should stop it now because if they don’t they are going to suffer most terrible punishment when the purifiers come, and they’ll be coming pretty soon — that is what the old people say.” 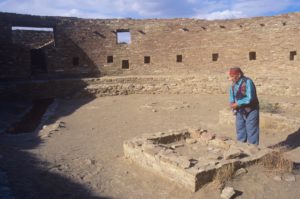 In June 2011, Santa Clara elder José Lucero and Onondaga Chief Oren Lyons organized a memorial gathering to celebrate Thomas’s remarkable life at the foot of Navajo Mountain. They asked me to put together a short film remembrance of Thomas. With the permission of Tommy Jr. we are releasing the film as we launch our new website, published here for the first time in September 2017. In the era of Trump, Thomas’s comments about “white man lies” sound downright prophetic.