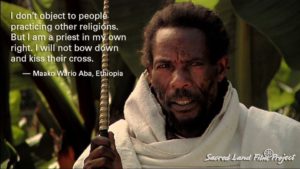 It’s a story that has played out all over the world. First come the missionaries doing good. Indigenous communities split apart and connections to land, ancestors and spirits of place weaken—not everywhere, but almost everywhere. Then come, in some order or another, government agents, land speculators, mining companies, the military. Some get rich. Some feel saved. But land and culture suffer. Sacred places are targeted just as political and spiritual leaders are taken down.

The connections have to be weakened for the colonizer to win.

We all know about this history but we rarely talk about it in any depth. And we rarely listen to what indigenous historians have to say about it—their analysis. Here it is. Onondaga Faithkeeper Oren Lyons, Native Hawaiian historian Davianna McGregor, Australian Aboriginal elder and former Catholic priest Patrick Dodson, and Anishinaabe author and activist Winona LaDuke offer their insights into the history of Christianity in relation to indigenous peoples around the world. What are the ecological implications of Christianity? 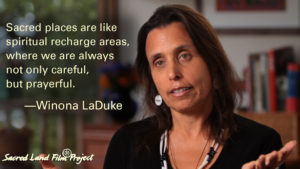 We are posting a 14-minute film clip titled “Indigenous Reflections on Christianity” on YouTube today, as our third episode, Fire and Ice, heads for national broadcast on The PBS World Channel this Sunday, May 31 at 9pm ET.

In both Ethiopia and Peru our cameras captured scenes of Christian harassment of indigenous ceremonies on sacred land. These interview bites are outtakes from some of the profound interviews we were fortunate to conduct during the making of Standing on Sacred Ground. While our four-hour series does include key sound bites that you will hear in these longer comments, some important thought sequences take a while to unfold. This needs to be a long, long conversation—so let’s have it!