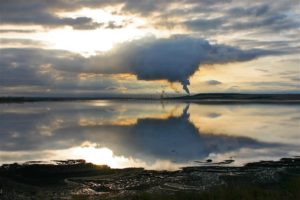 In March 2014 there was a brief media dust-up after the Washington Post reported that the Koch brothers were the largest leaseholders of tar sands acreage, having leased 1.1 million acres. The Post was simply reporting on investigative research by Victor Menotti and the International Forum on Globalization (IFG). “The Washington Post got hammered,” says Menotti. “They issued a statement backing down within 24 hours.” Before I go into more of that drama I want to pass on the story behind the map image below.

On our film research trip to Alberta, Canada, in October 2009, as we started work on Profit and Loss, we visited the Tar Sands Discovery Museum in Fort McMurray. A multicolored map of leaseholders listed Koch Exploration along with ExxonMobil, Total, Chevron, BP, Shell and 50 other corporations. I failed to understand the significance of the photo I’d snapped. If you look at the light brown colored blocks you see Koch Exploration (“KOCH”) all over the map. I should have tuned into this important fact, but there were so many oil companies in dizzying array that I just took the photo for research documentation and never really studied the details. We had a lot of filming to do and I take way too many photos! 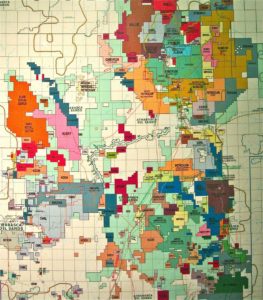 Fast forward to October 2013: IFG issued a well-researched report based on claims that the Koch brothers had leased as many as 2 million acres in tar sands country, a fact that had gone previously unreported. The Koch brothers, of course, are the determined backers of the Keystone XL pipeline, who recently announced they will spend $889 million to influence the 2016 elections. When the Washington Post ran the story, the newspaper was quickly attacked by the Powerline blog under the headline: “Washington Post Falls for Left Wing Fraud.” The ensuing argument was over whether the Koch brothers had leased 2 million acres, or 1.1 million, or less, whether they are “the largest” leaseholders when compared to other oil companies, and whether construction of the Keystone XL pipeline will enrich the Koch empire or technically result in an economic loss. The attack prompted an unusual defense of their original article by Post reporters Steven Mufson and Juliet Eilperin, and then a follow-up piece recalculating all the math of who owns how many acres—and it turned out a senior Canadian oil official confirmed the Koch’s own “closer to two million acres.”

The real news obscured by the pseudo-argument was that Koch Industries/Koch Exploration controls an estimated 3,125 square miles of tar sands-rich land. That’s roughly three Rhode Islands. The author of the attack blog was John Hinderaker, a managing partner in the Minneapolis law firm of Faegre and Benson. You can see him on Fox News. He is a frequent Powerline blogger, but you have to dig to uncover the fact that the Faegre and Benson law firm represents Koch Industries.

This was manufactured confusion. Intimidation of the media. The attack cleverly shifted the argument to whether the Kochs have 2 million acres (or less), whether they are the biggest leaseholder (or the second or third biggest), whether Keystone approval will enrich them. Besides uncovering a previously unreported and hugely important fact, why is the IFG report and subsequent attack important? Says Menotti: “It shows who owns the carbon. Following the carbon and following the money is what led us to the Koch brothers, and now we know why they are spending so much money on taking over Congress and stopping the regulation of carbon. And the first action is Keystone. Look at the map and see the acreage and it makes sense right away. You need a pipe to get it to market. It’s common sense.”