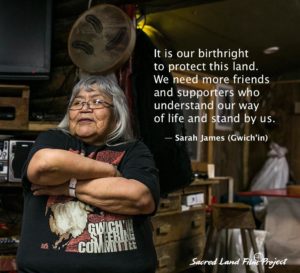 I need to share my pain. Yesterday I had to go into our website map of sacred sites around the world and change the status of the Arctic National Wildlife Refuge from “Protected” to “Endangered.”

I felt sick to my stomach—that tingly queasy feeling you get when the flu is coming on. Forty years of work by hundreds of people to protect a sacred landscape—“the sacred place where life begins” for the Gwich’in people. Caribou calving grounds for magnificent creatures that sustain people, wolves and bears are about to be undermined by tax scam legislation that’s been railroaded through by people whose work for oil companies has finally emerged into the light of day.

This tragedy has flown almost entirely under the radar, except for a few dozen upcoming lawsuits and people who will chain themselves and friends to bulldozers.

From the Arctic National Wildlife Refuge to the Bears Ears, sacred sites are under attack like never before. Though it’s nothing new, it reinforces the fact that we are engaged in timely work. Urgent work.

It’s easy to be down in the dumps these days. Yes, things are truly messed up. But deeply-rooted resistance works, and progress can be made in the darkest of times. This is the moment for sophisticated resistance, telling moving stories of indigenous people fighting back with direct action, lawsuits, prayer and those ever-present wise words of warning.

At year’s end, let’s take the long view and find hope in the important victories indigenous people and their allies have achieved over the decades—success stories that have shifted our paradigm:

With each of these remarkable stories, we learn from the love for the land, the deeply felt cultural obligation to protect, the determined resistance where the fighting warrior spirit is balanced by nurturing values that come alive in ceremony and prayer. Protecting sacred places is a struggle we all feel is right and important. We believe these struggles hold the power to undermine our extractive, materialistic, earth-wounding ways. There is still so much work to be done.

As sacred lands from the Arctic National Wildlife Refuge to Bears Ears face renewed attacks, our timely, urgent work would benefit from your support. That’s why we are asking you to make a tax-deductible donation at this critical time. Please let your generosity nourish our efforts to tell important success stories that expose and counter the destruction. Join us in this effort to protect the lands you love and that are so critical to indigenous people worldwide. Thank you.