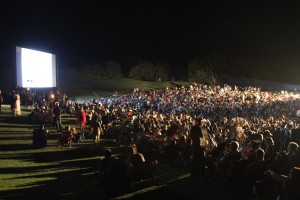 Thousands came to the opening night of the Maui Film Festival to see Islands of Sanctuary!

Islands of Sanctuary premiered at the Maui Film Festival on June 12 under a starry sky with more than a thousand people staying to watch the late night screening. I was most touched by the presence of so many members of the Protect Kaho`olawe Ohana, who came in from all the islands to celebrate the birth of a film that highlights their decades-long struggle to take care of the island of Kaho`olawe as a sacred place. Emmett Aluli, Davianna McGregor, Luana Busby-Neff, Craig Neff, Derek and Kylee Mar, Donne Dawson, Kaliko Baker, Mike Nahoopii, Uncle Les Kuloloia, and Kim Birnie were all there to chant the audience into the film, which is the fourth episode of our new Standing on Sacred Ground series.

There was a nice review of the film in the Honolulu Pulse before the screening by reporter Matthew Gurewitsch. Also, an interview with the filmmaker in the Maui Film Festival blog as well as a great festival page on the film with a trailer we edited just for this premiere screening.

Next stop: the Altai Republic of Russia for premieres of our first episode in Uch Enmek Nature Park on June 22 as part of a solstice fire ceremony, and then a screening in Moscow at the MultiMedia Museum, Ostozhenka 16, on July 1 at 7 pm. Here is an invitation you can forward to friends in Russia with details about the Moscow screening:

Please join us for the Moscow premiere of Pilgrims and Tourists in the Pastures of Heaven at the MultiMedia Museum in Moscow on July 1. This hour-long documentary film is the first episode of the new four-part Standing on Sacred Ground series, and it will be screened with Russian subtitles. The film will be shown at the MultiMedia Museum, Ostozhenka 16, on July 1 at 7 pm. Winnemem Wintu Chief Caleen Sisk from California, Danil Mamyev, Altaian cultural leader and founder of Uch Enmek Nature Park, and film director Christopher (Toby) McLeod will all appear in person to answer questions after the film. The Standing on Sacred Ground series is produced by the Sacred Land Film Project of Earth Island Institute. This screening is sponsored by the U.S. Embassy with funding from Trust for Mutual Understanding.

Next up after Russia: Redding! We will have the U.S. Premiere of episode one Pilgrims and Tourists in the Pastures of Heaven, on the evening of Saturday, September 14, at the beautiful Cascade Theater, 1731 Market St., in Redding, California. Winnemem Chief Caleen Sisk will be on hand to mark — and mourn — the 75th anniversary of the Bureau of Reclamation’s completion of Shasta Dam, which flooded her tribe’s traditional homeland on the McCloud River.

After that, we have been invited to screen at the Mill Valley Film Festival between October 3 and 13, details to be determined, and at the Bioneers Conference, on Saturday night, October 19. Please join us!