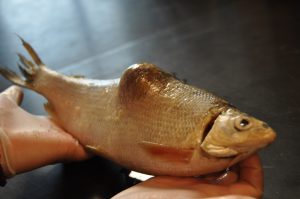 In our film, Profit and Loss, we have four brief scenes of Mike Mercredi explaining a giant wall map of the Alberta tar sands that he and his colleague Lionel Lepine created for their Athabasca Chipewyan First Nation tribal government. The clips we use in the film are about 20 seconds each, and like all sound-bite simplification they’re cut from a 19-minute “map rap” in which these two amazing activists methodically lay out a powerful stream of consciousness describing the tar sands from a dozen angles—always focused on nature and culture or ethics and history.

When we started filming the tar sands in 2009, there had been virtually no media coverage in the United States—even though this form of extreme oil extraction is the largest industrial development in the history of mankind. Thankfully, that has changed now. But the full story is still not being told, in spite of the fact that U.S. consumers burn roughly 1.3 million barrels of tar sands oil per day and the leases stretch over an area the size of Florida or England.

While the focus in the U.S. has been on the Keystone XL pipeline drama, our film focuses on the cultural and ecological horrors playing out in Alberta. Cancer, deformed fish, sacred places bulldozed, 65-square miles of toxic waste—the ethics of a very unconventional form of oil.

As Jacques Leslie pointed out in an op-ed in the New York Times: “Keystone XL is only one of 13 pipelines completed or proposed by the Harper government — they would extend for 10,000 miles, not just to the gulf, but to both the Atlantic and the Pacific Oceans.” Leslie also reported: “Canada’s National Energy Board, an ostensibly independent regulatory agency, coordinated with the nation’s intelligence service, police and oil companies to spy on environmentalists.”

Check out a new video on our YouTube channel: “Tar Sands Map Rap with Mike Mercredi and Lionel Lepine.”