For more than seven years the Dongria Kondh in the east India State of Orissa fought to protect the sacred Niyamgiri Hills-home of their God, Niyam Raja-from mining giant Vedanta Resources’ plan to extract 73 million tons of bauxite from the hills. At times it seemed virtually impossible that a tribe of 8,000 people could defeat a company whose major shareholder’s net worth exceeds $3.5 billion. But in April 2013 the Gram Sabhas (community councils) in the twelve most affected Dongria Kondh villages voted to deny mining rights to Vedanta-a vote the Supreme Court had ordered to ensure compliance with the rights of tribal people under India’s 2006 Forest Rights Act. It was a landmark triumph in the protection of sacred sites worldwide and was dubbed India’s first ever “environmental referendum.” But Vedanta Resources hasn’t given up and the Dongria Kondh and their allies worry that with the 2014 national election victory of the Bharatiya Janata Party (BJP) and its pro-business Prime Minister, Narendra Modi, their sacred landscape may once again be threatened-and along with it their spiritual and earthly livelihood. As Khajuri village resident, Kumthadi Vadaka told filmmaker Suma Josson in 2008, “Niyamgiri is our God. We live in these mountains and survive. We don’t have any land on which we can produce and live. We are dependent on the mountains. We won’t leave Niyamgiri.”

The bucolic Niyamgiri Hills, rich in biodiversity, abounding with dense forests and meadows, are home to the Dongria Kondh and Kutia Kondh tribal groups, whose livelihoods and spirituality are inextricably linked with the land. The upper reaches of the hills are home to about 8,000 Dongria Kondh who primarily live off the land. The related Kutia Kondh live in the foothills. The Dongria Kondh are known for their diverse and intricate agro-forestry system that uses mountain slopes and streams to cultivate patches of land cleared from the forests, rotating uses to maintain soil fertility.

In addition to subsistence crops, the fruit they grow on forest plots earns a substantial income throughout the year. The streams they rely on are fed throughout the seasons from water accumulating in the mountains porous cap-rock formations rich in the very mineral-bauxite- that Vedanta Resources seeks to mine. They also raise chicken, pigs, goats and buffaloes. The buffalo are specifically raised for sacrifice in religious and wedding rituals.

The Dongria Kondh and Kutia Kondh regard the Niyamgiri hills as sacred and believe their survival is dependent on the integrity of the ecosystem. Their most revered god, Niyam Raja, “the giver of law,” lives in the highest peak. They worship the mountains (male) along with the earth (female). Their artwork and colorful clothing depict reoccurring triangular shapes representing the importance of mountains in their community and culture.

Investigators made note of the Dongria Kondhs’ self-sufficiency in a 2010 Ministry of Environment and Forests report:

The Dongaria Kondh we met were proud of their economic independence and freedom from want. Over and over again, they attributed their well-being and contentment to the Niyamgiri hills and their bounty.

The Niyamgiri Hills are also an important wildlife habitat and home to the rare lizard, the Golden Gecko. The hills’ location between the Kandhamal district of forests and the forests of Rayagada, Kalahandi and Koraput districts creates an important migration corridor for Asian elephants and tigers, which before Vedanta’s intervention had been selected for designation as an elephant preserve. The area is home to some 20 species of orchids which the Dongria Kondh use for medicinal purposes to treat different ailments such as poisonous bites, stomach disorders, arthritis, tuberculosis, cholera, eczema, wounds and sores, dysentery, asthma, malaria, and many more.

A key element of the area’s biodiversity is the Dongria Kondhs’ stewardship of the environment, as noted in a Ministry of Environment and Forests report:

The fact that this ecosystem is mostly prevalent in areas inhabited by the Dongaria Kondh suggests that, besides natural geological and climatic factors, it has also been modified by human actions such as burning for grasses and collection of Minor Forest Produce (MFP) practiced over a long period by the hill tribes.

But the Dongria Kondhs’ sacred hills are also home to an estimated 73 million tons of mineable bauxite-used to produce aluminum-which has brought commercial interests to the area.

Kalahandi, where the hills are located, is one of the most draught-prone districts in India. Bauxite-bearing soils have a highly porous structure that gives them an increased capacity for water retention. A Wildlife Institute of India report concluded that mining could harm the area’s aquifers and streams which are key to both the lush ecosystem, and the Kondh’s mountain agriculture.

In 2003, Vedanta Resources signed an agreement with the State Government of Orissa to construct an aluminum refinery, a “captive”; power plant, and related mining facilities at Lanjigarh in Kalahandi district. This proposal met fierce opposition from the Dongria Kondh:

They strongly voiced their contentment with life and their opposition to any destructive change of the ecology threatening their culture. As Sikoka Budhga said, ‘We can never leave Niyamgiri. If the mountains are mined, the water will dry up. The crops won’t ripen. The medicinal plants will disappear. The air will turn bad. Our gods will be angry. How will we live? We cannot leave Niyamgiri. (2010 MoEF report)

Vedanta initially proposed a refinery with a capacity of one million tons of aluminum per year. They proposed extracting the 73 million tons of bauxite from the mountains above the refinery over a period of 23 years. The proposed mining area would cover 7 square kilometers on the top of Niyamgiri Hills. Vedanta planned open pit mining to a depth of 13.6 meters, crushing the bauxite, and transporting it to the refinery at the bottom of the hill via conveyor belt. Twenty percent of the Dongria Kondh live in the proposed mining area.

Despite multiple legal appeals to stop the mine and refinery, Vedanta went ahead and constructed the refinery, completing it in 2006. The refinery displaced 96 Kutia Kondh and Dalit households in the villages of Rengopali and Bandhaguda.

Seven years have passed since then, but middle-aged people like Moti Majhi still yearn for the past: ‘We used to grow vegetables. Now we have to buy them. We live here in the factory’s shadow, but there’s no comfort here. It gives us nothing except sickness.’ When asked if she wanted the factory to give her a job, Moti Majhi shook her head. When asked whether she would like land, she firmly assented. (2010 MoEF report)

Residents of Bandhaguda, the village closest to the refinery, complain of dust and water pollution. The fine dust emitted from the red mud waste settling pond that serves the factory has been reported to cause asthma and other respiratory illnesses among a large number of villagers. The settling pond location, close by the banks of the Vansadhara River, presents a serious threat of contamination to downstream water users.

In 2006, India passed the Forest Rights Act, landmark legislation that protects forests for established uses by their traditional inhabitants. The preamble states that forest dwellers are “integral to the very survival and sustainability of the forest ecosystem.” While the law does not grant formal legal title to forest dwellers, it guarantees perpetual rights of use by those who show their own or their forbearer’s pre-existing occupancy and use of an area. The Forest Rights Act has been a key to success in some important environmental and tribal victories throughout India. As Supreme Court lawyer Ritwick Dutta told an Asian Judges symposium in 2014, the Supreme Court hears cases weekly about the forests: “We don’t really have a green bench-we have a forest bench.”

In 2007, concerned about evidence of severe environmental and human hazards at other Vedanta-owned facilities, India’s Supreme Court put the Niyamgiri Hills mining project on hold, though Vedanta was granted permission to refine bauxite from already operating mine sites.

In 2008, the Indian Supreme Court approved the mining clearances for a joint operation by a Vedanta facility in tandem with the State of Orissa’s mining company. But that arrangement was halted after a 2010 site inspection by the Ministry of Environment and Forests found several violations of environmental laws, including violations of the Forest Rights Act. A four-member committee convened to review the project issued a damning report, and a thorough review conducted personally by the Minister of Environment and Forests ultimately concluded that the mining should not be allowed in the Niyamgiri Hills and that the environmental clearances given to the refinery were unlawful: “Since the company in question has repeatedly violated the law, allowing it further access to the proposed mining lease area at the cost of the rights of the Kutia and Dongaria Kondh, will have serious consequences for the security and well being of the entire country.” 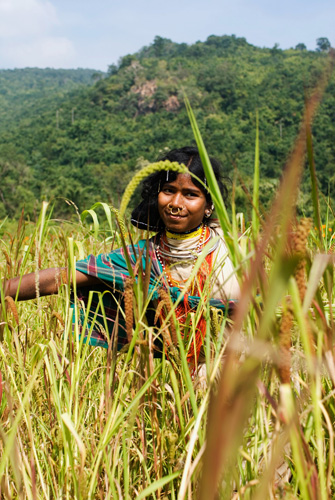 The Forest Rights Act empowers village councils, known as Gram Sabhas to safeguard the environment in protected areas from decisions or destructive practices that could damage the environment, land use, habitat biodiversity, or natural and cultural heritage. According to the MoEF review of the process, Vedanta and government representatives did not get the proper approval from the community Gram Sabhas, as required by the Forest Rights Act.

The powerful accumulation of local and international protests, damning independent reports, and the legal requirements of the Forest Rights Act resulted in a Supreme Court order requiring the mine to be approved by votes of all of the Gram Sabhas in the twelve Dongria Kondh villages that would be most affected. In April 2013, all twelve village councils voted to deny mining rights to Vedanta, thus winning one of the biggest sacred site victories of all time.

But it appears that Vedanta has not given up and is likely to gain support from Prime Minister Modi and other allies in India’s new BJP government. In November of 2014 the Ministry of Environment and Forests announced plans to amend the Forest Rights Act to diminish the authority of the Gram Sabhas.

Following this announcement, 500 people took to the streets of Bhubanswar in protest.

The Dongria Kondh and their allies continue to demand that the Vedanta refinery be dismantled. Vedanta has a pending application to expand the refinery six-fold, despite the fact that the refinery currently operates at 25 percent of its capacity due to a lack of raw materials.

More than 1,000 people attended a public hearing on the refinery expansion in July 2014. Dongria Kondh representatives testified that pollution from the refinery is causing harm to their health and environment. They also said that Vedanta’s promises of jobs, schools and health care haven’t been fulfilled. Many people present at the hearing told Survival International that the majority in attendance opposed the expansion, but the media, local authorities and company representatives reported the meeting as a success in favor of expansion.

Survival International is calling on supporters of the Dongria Kondh to write letters to the Indian government opposing the refinery expansion. A template is available on their website: http://www.survivalinternational.org/actnow/writealetter/dongria

Editorial. “The significance of Niyamgiri.” The Hindu, May 3, 2013. http://www.thehindu.com/opinion/editorial/the-significance-of-niyamgiri/article4677438.ece

Jagger, Bianca. “The battle for Niyamgiri.” The Guardian, June 12, 2010. http://www.theguardian.com/environment/2010/jun/13/mining-aluminium-tribes-india-jagger