On Stage with Winona 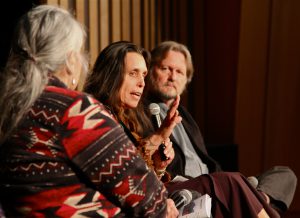 It was a cold afternoon in DC, gray skies but no rain, perfect weather to drive a crowd into an auditorium to watch four hours of films. The Capitol dome sat quiet and irrelevant off to the northeast, spitting distance from the Smithsonian National Museum of the American Indian. For me, NMAI is the crucible we needed to enter. When Melissa Bisagni, the film curator, agreed to host the entire Standing on Sacred Ground series as part of the Environmental Film Festival in the Nation’s Capital, it was a very sweet moment for the Sacred Land Film Project. I think the fortress door swung open because my old friend Winona LaDuke offered to appear with the films, and boy did she show up.

When the films started at noon there was quite a buzz in the air. By the time the fourth film began at 4:30 the room was packed, with people standing in the doorways. Quite a few brave souls watched the entire series. It was very exciting to screen at the Smithsonian, with PBS considering our series for broadcast this very week, and the slow-building momentum of independent film distribution starting to build—slowly, slowly…

After watching the tar sands story in Profit and Loss, Winona and I shared the ironic reflection that 35 years ago we started working to stop national sacrifice areas and now we are fighting international sacrifice areas. Winona commented, “We want to move gracefully out of the fossil fuel economy. We don’t want to crash our way out of this. And remember, only 3% of the tar sands have been mined. We can stop it now—and we have to.” Winona poignantly joked that she would rather be growing wild rice and corn at home in Minnesota but this phase of her life has been taken over fighting tar sands pipelines proposed in the Midwest.

After watching the melting glaciers of Peru in Fire and Ice, a young native Yup’ik woman from Alaska described the imminent flooding of her home village of Newtok, from rising sea levels. Her village is being evacuated as climate change continues unabated.

The high point of the afternoon came for me at the start of the fourth and final film, Islands of Sanctuary. A big cheer went up after Hawaii’s Derek Mar said, “If we can take on the most powerful military force in the world, and win, there is hope for indigenous people all over the world.” The room just erupted. It was one of those moments filmmakers dream about.

After Islands of Sanctuary, Native Hawaiian Leimomi Apoliona-Brown told some great stories about the original occupation of Kaho`olawe and how the strategic Protect Kaho`olawe `Ohana activist movement sparked a renaissance of Hawaiian language and culture. Leimomi focused on the deep and complex meaning of Hawaiian words, `aina, kuleana, `ohana, malama — the love, responsibility for, familial relationship with and caretaking of the land that gives us life. Kaho`olawe is truly an inspiring, modern-day success story, and we are honored to be able to help tell it to the world. 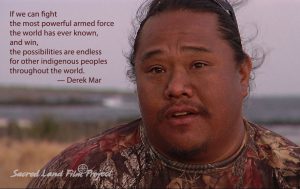 Big thanks to Katsi Cook, Akwesasne Mohawk midwife and community health and environmental justice activist, and José Barriero, Director of the Office of Latin American Research at NMAI for excellent commentary after the films, and to Brad Forster of the Environmental Film Festival, for filling my memory card with great photos.