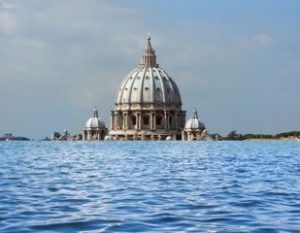 I was having some fun last week writing a letter of protest to Senator Barbara Boxer with water scientist Peter Gleick and Winnemem Chief Caleen Sisk. Ideas and questions were flying back and forth. How to make the impacts of raising Shasta Dam palpable? Seeking a metaphor that would capture the absurdity of flooding a community’s sacred places, both Peter and Caleen used the same analogy for Winnemem sacred sites on the McCloud River.

https://www.angelinvestmentnetwork.net/z7lqxu1 Peter put together a Photoshopped image of waters rising over the dome of St. Peter’s Basilica at the Vatican and emailed it around to the writing team. 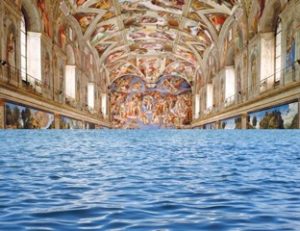 That prompted our communication specialist Susan Alexander to send Peter a copy of the historic 1966 ad designed by David Brower, Jerry Mander and Howard Gossage that asked: “Should We Flood the Sistine Chapel so Tourists Can Get Nearer to the Ceiling?” Peter responded with a second image.

https://kevinreillycollection.com/kcmc0krx Let’s deconstruct this analogy and have some more fun. When David Brower floated down the Grand Canyon with Bureau of Reclamation director Floyd Dominy (a journey chronicled in John McPhee’s classic book Encounters With the Archdruid), Dominy enthusiastically asserted that damming the Grand Canyon would allow tourists in boats to get closer to the canyon’s rainbow-hued cliff faces and the mysterious petroglyphs left by native people. Brower responded with the famous full-page ad in The New York Times and thousands of letters flooded into the offices of the Bureau of Reclamation and Interior Secretary Stewart Udall. The ad killed the dam (actually two were proposed and both were killed). 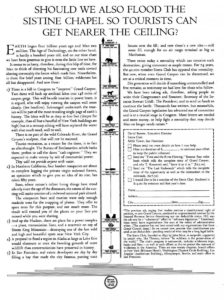 Why was this historic? Taking John Muir’s rapturous language about the spiritual power of nature one step further, Brower—for the first time in the modern era—wedded an activist campaign to the theme “this place is sacred and should be inviolate.” In asserting the sacredness of the Grand Canyon, Brower hit a nerve with the American public. It was not really articulated at the time, but the message resonated clearly: This is Sacred Land.

(Yes, Muir had tried the same argument with Hetch Hetchy, but it didn’t resonate widely with the public.)

This logic should also stop the federal government’s current misguided plan to raise the height of Shasta Dam, which would flood the Winnemem Wintu people for a second time, destroying most of their remaining sacred sites. But it is an argument that, while catching on more and more deeply, has still not crystalized in popular consciousness—despite all of the Sacred Land Film Project’s efforts over three decades!

I have filmed Puberty Rock, on the banks of the McCloud River, many times. We filmed when it was under the waters of Shasta Lake in the spring. We filmed young Winnemem girls grinding medicine on the rock after it emerged from the receding waters of the reservoir one hot July morning during an initiation ceremony. We filmed Winnemem Chief Caleen Sisk explaining the meaning of the place to government officials. Puberty Rock is a powerful cultural touchstone. It is ancient. It cannot be moved. It should not be forever flooded under an additional 18.5 feet of water. The Westlands Water District’s never-ending pursuit of more water and higher profits should not obliterate the Winnemem, their river, and their sacred places.

You can help right now by sending letters to California Senators Boxer and Feinstein. Please go to this link and you’ll find letters you can tailor to your own language or just cut and paste and mail. It will make a difference! We can stop this injustice.

https://www.bobbimccormick.com/5lzh89z75b And please sign the Winnemem’s CREDO petition against the Shasta Dam raise.

https://www.angelinvestmentnetwork.net/l94hw0vpuv2 P.S. Check out Peter Gleick’s terrific piece “Damn Dams” in Huffington Post— and thanks to Peter for the two images of Biblical floods.