PNG Court Rules in Favor of Nickel Mine 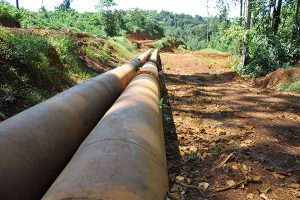 A court in Papua New Guinea this week cleared the way for the Chinese state-owned China Metallurgical Group Corp. to proceed with a $1.5 billion nickel-mining project, which had been blocked by injunctions over the environmental impact of the company’s plan to dispose of mine tailings in the ocean.

The long-awaited decision denied a petition for a permanent injunction and lifted a temporary injunction that had been granted to the plaintiffs, landowners on the Rai Coast, who bathe, fish and travel in the waters where millions of tons of mining waste would be dumped.

In his ruling, judge David Cannings found there was “a high likelihood that serious environmental harm … will be caused by operation of the [deep-sea tailings placement].” Yet he nevertheless refused to grant a permanent injunction, citing, among other things, the plaintiff’s delay in bringing the action (well after the government had approved waste-disposal plan), the economic consequences for the companies and other stakeholders, and potential negative impact on investor confidence in PNG as a whole.

Suggesting that the landowners might receive court help in the future — once the damage is done — the judge also noted, “If environmental harm of the type reasonably apprehended by the plaintiffs does actually occur, they will be able to commence fresh proceedings at short notice and seek the type of relief being denied them in these proceedings.” The court’s one concession to the plaintiffs’ requests was that they must be consulted and kept informed every three months on tailings-disposal issues, for the life of the mine. The Ramu plaintiffs intend to appeal the ruling.

Rewind one week, to a seemingly unrelated gathering at the David Brower Center (SLFP’s home office in Berkeley, Calif.) sponsored by Earth Island Institute, where Stewart Brand and Winona LaDuke debated about technology and the environment. An audience member — our friend Peter Coyote — stood up and commented that Brand was operating from a place of intellect and LaDuke from a place of wisdom. Peter suggested leaders would do well to have wisdom advisers, not just intellectuals and technocrats offering policy advice.

The concept strikes us as directly relevant to the court case in PNG. The ruling, applauded by the governor of Madang and PNG’s mining minister, is a clear example of the values that currently preside across the globe — particularly here in the United States, where our need to consume drives a frantic demand for more. The search for ever-increasing profits and more and more stuff is finally becoming imbedded in places previously considered too remote, pristine places like PNG, where people still live off the land and many deal in trade rather than money. These places are now under siege by a new value system that will reshape the land and the culture until they are a direct reflection of the dominant system. Wisdom seems far off indeed as mining waste begins to flow into the sea.

Here at the Sacred Land Film Project, we follow the news from afar, feeling as though it was just yesterday we were filming in Madang with our new partners and friends, promising to bring their story to the world. We are now in the heat of writing and editing the story, to fulfill our promise and produce a documentary record that will be a tribute to the voices of wisdom that still remain.

For more information, read the full court decision, visit Papua New Guinea Mine Watch, and listen to the plaintiffs’ lawyer, Tifanny Nongorr, comment on the decision.