Famous for the towering stone statues known as moai, the island of Rapa Nui holds immense cultural value to its native Rapa Nui clans, a society of Polynesian origin who arrived on the island around 400 A.D. With more than 100,000 visitors annually, tourism sustains the “Easter Island” economy—but management of tourism and the island itself remains under control of the far-off Chilean government. A constant influx of Chilean and international tourists seriously threatens the traditional rights of native Rapa Nui people to own land and protect their sacred sites, including more than 900 moai statues, burial sites and ceremonial grounds. Marisol Hitorangi, spokeswoman for the Hitorangi Clan of Rapa Nui speaks of their relationship with the land and the threat of tourism development: “The land to us is our Kainga, the womb of a mother that needs to be nourished so that it can remain fertile to support us. That is why my grandmother and mother buried their placentas and the bones of their ancestors in the same spot—now under the five-star hotel.”

https://integraleuropeanconference.com/2022/11/17/wlgrsjy Rising from the Pacific Ocean, 2,200 miles west of Chile, the island of Rapa Nui spans 63 square miles of hilly dry land, formed by volcanoes ascending from the sea floor. Dating back 16 centuries, generations have used sophisticated farming techniques to cultivate food and maintain a strong, biodiverse habitat. In 1722, Dutch explorers arrived at Rapa Nui, giving the island its well-known name, Easter Island, to commemorate the day they arrived. Following contact with Europeans, disease spread dangerously through the Rapa Nui population, sparing only approximately 100 individuals. But the Rapa Nui survived and today account for around 50 percent of the 7,750 people living on the island. In 1888, Chile annexed Easter Island and in 1903 leased the entire island for sheep farming, forcing native Rapa Nui people to be moved from their homes and contained in a small area, known today as the town Hanga Roa. Before and especially since annexation, which led to Rapa Nui ceding sovereignty to the Chilean government, native Rapa Nui people have struggled to defend their rights to own land and continue their cultural traditions. In May 2019, the Chilean government declared Rapa Nui in a state of “latency,” a political term indicating a territory on the edge of environmental collapse and demographic saturation.

The Polynesian name Rapa Nui translates to “Great Rapa,” intended to describe the island’s resemblance to Rapa Iti, “Small Rapa,” a neighboring island in Polynesia. Native Rapa Nui people refer to the island as Te Pito o te Henua, or “navel of the world,” affirming their connection to the land as nurturing mother.

Order Greenstone Xanax With primary control of the land falling under Chilean jurisdiction, the Rapa Nui people have had to continually fight to keep and protect their land. Since annexation, they have been viewed as occupants of the land, not owners or natives. The Chilean government fails to recognize Rapa Nui heritage sites and traditional rights to land ownership, allowing unchecked visitation and immigration to the island. Pedro Edmunds Paoa, the island’s mayor, notes that the population has almost doubled in recent decades as a result of tourism and real estate development. Edmunds Paoa says of the 7,750 people living on Rapa Nui, the current population number is “3,000 too many” and overpopulation is pushing the island beyond its carrying capacity.

https://www.greenlifestylemarket.com/2022/11/17/jzxumyjx With increased visitation came increased development of hotels and attractions, along with damage to sacred sites by uneducated visitors who view the island as a tourist destination and playground. Not only are sacred sites being harmed, but the ecological integrity of the island is under assault by a growing horde of humanity. Damage includes a total exhaustion of resources, an eventual collapse in the treatment of waste on the island, and unsustainable, large-scale development on fragile land. Despite concentrated efforts to implement environmental clean-up projects on the island, the Chilean state has refused to provide any support or mitigation measures, leaving the island and the people to their fate.

The island of Rapa Nui received two official protection designations in 1935, when most of the island was declared a National Park and the entirety of the island was designated a National Monument. While under those two protection administrations, Rapa Nui has still suffered greatly from tourism, vandalism and overgrazing. In an effort to improve protection and management, and to combat the impending loss of heritage and land, UNESCO declared Rapa Nui a World Heritage Site in 1995, protecting the 6,600 hectares of land within Rapa Nui National Park, which continued to be managed by the Chilean national government. While these actions were viewed as successes for conservation and protection of the land and culture, there are serious discrepancies within the management of the park that continue to exclude Rapa Nui people. The Chilean government still refuses to recognize indigenous peoples’ collective rights to ownership of the land—specifically, within Rapa Nui National Park, where Hitorangi clan leaders say almost all of the Rapa Nui’s ancestral and sacred sites exist. 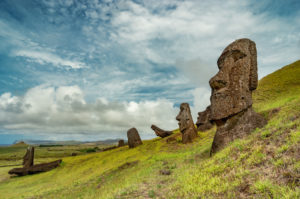 Archaeologists, including Jo Anne Van Tilburg from UCLA, have done analysis of soil samples around the statues and concluded that the peak of moai construction occurred between 1300 and 1450. The statues continued to be carved until or just after first contact with Europeans in 1722. With the largest moai standing 70 feet tall and weighing 250 tons, the intricacy and distinctive detail of each unique moai is incredible. No two maoi are the same, differing in expression, stature and size so as to accurately represent each ancestral line.

https://markmadsen.com/2022/11/17/mv6swendpf Most of the moai are located within Rapa Nui National Park’s boundaries, receiving much needed protection given their cultural significance to native Rapa Nui people. The towering moai most often line the coast, facing inwards, watching over and protecting the land. According to Mayor Pedro Edmunds Paoa, specific groups of moai statues are immortal representatives of ancestors and family lines. The mayor says his ancestors are represented at a site called Tahai, where his “genealogy traces all the way to that site 85 times.” Edmunds Paoa also alludes to the energy of the moai, which is called mana. He describes this energy as knowledge, wisdom and a force that gives you strength. When native Rapa Nui die, their mana flows out of their bodies and into the moai. With such a deep and ancient connection, Rapa Nui people see the protection of the island and the moai statues as a way to protect and honor their ancestors. Edmunds Paoa insists the essence of mana is present in more than just the moai: “Those who believe in mana say it’s not just in the moai, it can be found in everything here—in the waves that constantly crash ashore, in the rocky soil, and in the green grass that blankets the island.”

https://www.bobbimccormick.com/8h0h89ep Despite protective measures, the Rapa Nui people continue to feel the cultural sites of their community are unrecognized and desecrated by tourist behavior and foreign-owned development. Resistance escalated in 2011, when Rapa Nui people organized an occupation of the Hanga Roa Eco-Village and Spa, protesting its existence by tying themselves down in the lobby. The five-star hotel, which is owned by the Schiess family of Germany, is built directly atop an ancestral village and burial grounds. The protest was disrupted by Chilean police, who forcibly removed and arrested Rapa Nui people. Many Rapa Nui were freed without charges, but Marisol Hitorangi, leader of the Hitorangi clan that led the occupation, defended their action saying, “Being able to get our land back is to stay in contact with our ancestors. If we as Rapa Nui people allow this illegal land theft to continue, we’ll be allowing the total loss of our heritage.”

https://missafricausa.org/p729ich In 2015, native Rapa Nui blocked access to the national park, which they believed was being mismanaged and exploited by the National Forestry Corporation and the Chilean government. They demanded a major role in managing their traditional lands. In order for a transfer of management to happen, a legally recognized board had to be created. Ma’u Henua, “manage, guide the land” in native Rapa Nui language, was created in August 2016, and in early 2018, the Chilean government shifted the management of Rapa Nui National Park to the Ma’u Henua board. After the transfer of authority, a serious mismanagement of funds for the park by the Ma’u Henua board was well documented. This led to continued protesting and unrest on the island, led by the Rapa Nui people. The underlying issue for the constant mismanagement and exploitation of the island is Chile’s refusal to consider the island and people of Rapa Nui as deserving of governance separate from the mainland.

Without full recognition of Rapa Nui as a society separate from mainland Chile, a large majority of the laws that govern the island are essentially inapplicable, given that they were enacted without consideration of the unique cultural and ecological landscape of Rapa Nui. In 2007, after an arduous battle for representation and consideration, Chile amended the Constitution of the Republic to establish Rapa Nui as a “Special Territory.” According to the amendment, “The Governance and Administration of these territories shall be governed by such special statutes as the respective constitutional organic laws may establish.” This requires the Chilean government to create a special statute for more localized management of the island. Within this amendment, it is noted that until guidelines for the special statute have been enacted, the island will remain under Chilean mainland government management. After 13 years, the Special Statute for Autonomy has still not been written.

https://partyhosthelper.com/ilkhy2ngqq The native people of Rapa Nui continue to push for such a statute, which would allow them to exercise their right to self-determination and combat the cultural and ecological destruction that has occurred due to overpopulation and tourism. The special statute is essential for the needs and voices of the Rapa Nui people to be heard and to support their defense of the conservation and native rights to their sacred land.

Order Xanax Legally Online Answers to the so-called mysteries of the moai on Easter Island are hidden in plain sight https://www.wbur.org/hereandnow/2022/04/15/moai-easter-island-outside-in