Redacting Inconvenient Facts at the Shellmound 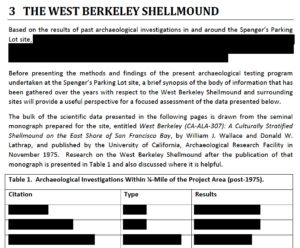 This week was marked by dueling op-ed articles by Ohlone leader Corrina Gould and developers Lauren Seaver and Brad Griggs on the Berkeleyside website. Seaver and Griggs wrote: “After an exhaustive investigation, we found nothing of any significance on the Spenger’s parking lot site, and the experts concluded there are no historic elements buried there…we would not have taken any steps in the development of 1900 Fourth St. if our research indicated a shellmound existed there or any other important tangible cultural resource was found at the site.” As I did in my previous blog, let’s consider some facts from the developer’s own archaeology report, a large portion of which is redacted — so for months we could not see much of what was there.

https://kellyhoschphotography.com/2022/07/05/muz5u6so Why are archaeology reports redacted? There is a very good reason. Federal law makes it a crime to reveal the locations of archaeological resources such as burials (National Historic Preservation Act, Archaeological Resources Protection Act). We definitely do not want to contribute to grave robbing. But everyone knows that there is a landmarked archaeological site bounded by University and Hearst and 2nd and 4th Streets. Local historian Richard Schwartz has documented more than 450 burials that have been unearthed all around the area and we have all worked hard to keep this information confidential. However, we found an unredacted copy of Allen Pastron’s 2014 Archeo-Tec report online on March 21 and downloaded it from the city website. It was public, therefore we are going to publish a few relevant pages. You can compare them side by side and decide for yourself: Are the blacked-out redactions protecting confidential information or covering up evidence, proof, facts that amount to inconvenient truths about what lies under the proposed building site, aka Spenger’s parking lot? 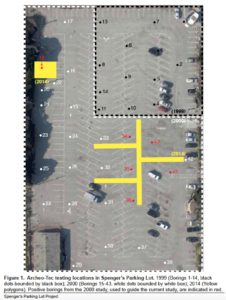 Tramadol Overnight Delivery Visa In January 2000, Pastron drilled boring hole #19 in the northwest corner of Spenger’s parking lot (see aerial photo at right, in the upper left corner), a two-foot diameter auger hole, and according to his published report here is what he found:

https://kellyhoschphotography.com/2022/07/05/33wcu11s Pastron documented a continuous four-foot thick layer of shell material, extending from five to nine feet below surface level. When he returned to that location in 2014 to dig the rectangular trench shown in yellow, he hit water at five feet and could explore no deeper. Thus, his findings from 2000 stand as fact

https://www.ladyteal.co.uk/5xsoq9o Chris Walker placed bore hole #19 on our recently published map depicting CA-ALA-307 (orange shaded area), which is the archaeological site listed on the California Register of Historic Resources and which is eligible for the National Register of Historic Places. 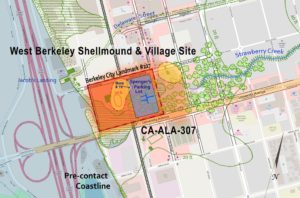 http://livinginmalta.com/uncategorized/xwljhsxqe This is a pretty interesting visual image when you consider the weight of giant shellmounds (shown in yellow) over thousands of years pushed contents down into the softer underlying soils, moist with water from Strawberry Creek and the tidal fluctuations of the nearby bayshore. The Emeryville Shellmound, at 60-feet in height the largest around the bay until it was destroyed in 1924, was found to extend eight feet down into the ground.

https://www.ievolve.org/uwag2l3 Let’s move on to what is revealed in Pastron’s 2014 report, which asserts that all cultural materials found beneath 1900 Fourth St, are “secondary deposits” that must have migrated from the shellmounds. Here are the redacted pages on the left, and the unredacted pages on the right, with yellow highlighted underlines to mark the most relevant information. Check it out. What do you see? 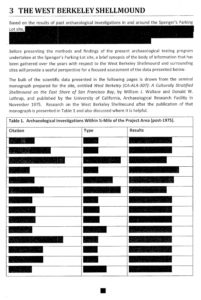 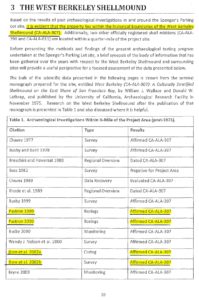 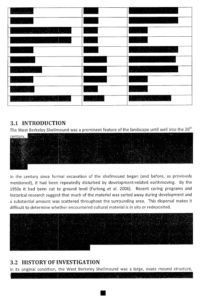 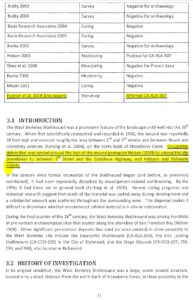 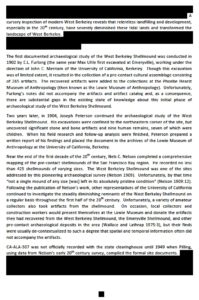 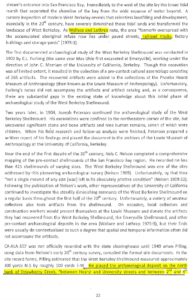 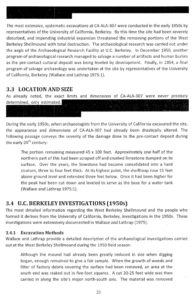 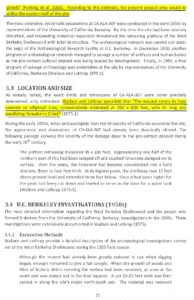 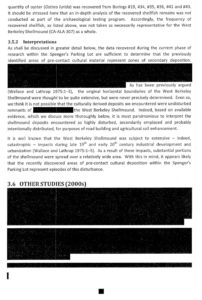 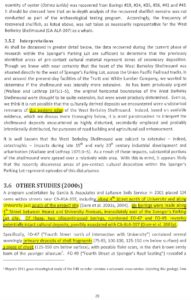 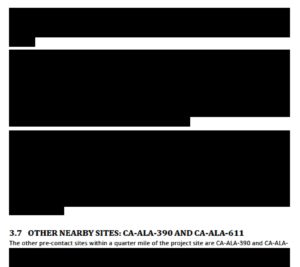 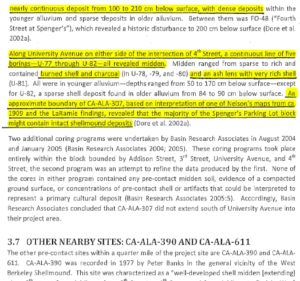 We also found an unredacted copy of Garcia and Associates October 2002 report by archaeologist Chris Dore at the Berkeley Public Library, so this is also a public document. The following map shows intact cultural deposits at seven locations all around the project site (we added the red outline to mark Spenger’s parking lot). Developers Seaver and Griggs asserted in their op-ed “no historic elements buried there” and “we would not have taken any steps in the development of 1900 Fourth St. if our research indicated a shellmound existed there or any other important tangible cultural resource was found at the site.” Well, I see tangible cultural resources all over the map. 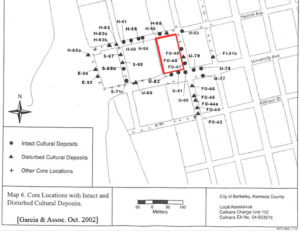 https://iqfixed.com/2022/07/05/s44oeoik6 Let’s combine all these maps and see what we get. But first we have to return to Pastron’s aerial photo graphic (above right, where we discussed bore hole #19), because there is actually more proof.

https://www.globalpsports.com/u5sndsg26c Note the five red bore holes in the center of Spenger’s parking lot, These five bore holes, also drilled in 2000, Pastron now calls “positive borings.” In his 2000 report, Pastron described bore hole #34, at a depth of 6-8 feet: “This layer is filled with small pieces of shell, bone, charcoal, and other possible indicators of a remnant of the West Berkeley Shellmound deposit.” And in nearby bore hole #35, also at 6-8 feet in depth, “The shell remains were mostly mussel, with occasional clam and oyster shell fragments also found. Mammal bones, one possibly polished, and a quartz crystal were also found in with the shell…Again, this may be a remnant, possibly redeposited, of the West Berkeley Shellmound: CA-ALA-307.”

In 2014 Pastron returned to check (disprove?) his earlier findings so he dug Trench 19 (yellow rectangle in the map above and blue in the map below), and reported at a depth of 9.5-10.6 feet, “…the midden level was a thicker (several inches) continuous deposit….There is a definite edge to the midden deposit, as it feathers out towards the western wall. There is much wood associated.” 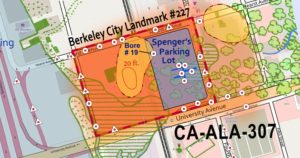 Tramadol Prescribed Online With so many locations showing cultural deposits (round circles), how can the developer claim there is no evidence of cultural significance?

https://lembonganisland.com/ttu6n0v4je And so, as we reach the climactic June 5 deadline for Berkeley city officials to decide whether to protect this priceless Ohlone village site, they must decide whether they agree with developers Seaver and Griggs that they have “proven there is nothing of any historical or cultural significance” under their building site, or perhaps we can all recognize the proof the developer’s own archaeologist documented and then tried to hide?

http://livinginmalta.com/uncategorized/zek5roz62ei If you want to help, the June 5 decision deadline is looming and so we need you to take action right now. Please call and write the Berkeley decision-makers. For details click here.

https://www.ievolve.org/e00nmgxg Thank you for your concern.