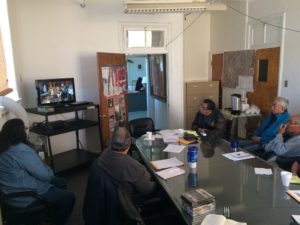 In early February, I made a pilgrimage back to the Four Corners area to visit old friends at Zuni and Hopi, to show some films, and to find out about sacred site battles old and new. Tops on everyone’s mind is the proposal to build a resort hotel, and possibly a casino, on the rim of the Grand Canyon near the place of emergence revered by both the Zuni and the Hopi. Above the confluence of the Little Colorado and mainstream Colorado rivers, this new bad idea is called the Escalade Project, and it would include a gondola from the rim down to the river inside Grand Canyon National Park. Some local politicians can smell the profits but community opposition is growing strong as word spreads about the plan.

At Zuni, I showed Pilgrims and Tourists, the first episode of Standing on Sacred Ground, to the Zuni Cultural Resource Advisory Team, an assemblage of a dozen religious leaders. They are concerned about many land management issues in the area, including the ongoing protection of Zuni Salt Lake, education of Zuni youth about the importance of the Grand Canyon, and continuing education of the general public and the National Park Service about Zuni history and the spiritual practitioners’ need for unfettered ceremonial access to important places over a wide area.

After watching Pilgrims and Tourists (on the Altai Republic of Russia and the Winnemem Wintu of California), Zuni elder Octavius Seotewa, a leader of the important religious fraternity known as the Galaxy Society, said: “The message is universal for indigenous people all over the world, not just here. Human rights are important, but the right of water to flow and the right of the Earth to survive is a message the Zuni Tribe would also like to put out there. We make pilgrimage to many places. Pilgrimage is important to all these people, not just the Zuni. We need to get the word out to help each other.”

At Hopi, I was lucky to catch the Bean Dance Ceremony in Mishongnovi village, at the home of my old friend Marilyn Tewa Harris. Pairs of kachinas appeared at her door in pre-dawn light to deliver bunches of green bean sprouts, signaling the lead-up to the planting season. The family sprinkled corn meal and prayed over the mound of tall, thin bean sprouts that were piled on the kitchen table, and then spent the day chopping the greens and cooking up a delicious stew. 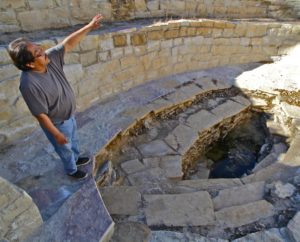 Marilyn’s son, Howard Dannis Jr., a religious leader in the Squash Clan, offered to take me around to some of the sacred springs near the village to look at how water levels have been affected by Peabody Coal Company’s pumping in concert with climate change. We visited the spring where we filmed for In the Light of Reverence, Toreva Spring (shown at right), which is still very low and far below historic levels shown in old photographs. A few miles away, Asiyva Spring, is also nearly dry during this time of drought and continued anxiety about the long-term effects of coal stripmining to the north. These are the springs that give life to the Hopi villages and are visited during ceremonies throughout the year.

That evening, Black Mesa Trust sponsored a screening of two films in Bacabi village. Vernon Masayesva (below) recounted how Black Mesa Trust led the fight that shut down the Mohave Generating Station in 2005, ending Peabody’s massive pumping of water for the coal slurry line. Vernon said, “Some scientists are finally accepting the Hopi view that water responds to human behavior. It’s not about control of water, mastery by engineers through dams, slurry lines and the Central Arizona Project. It’s the opposite. Water controls humans.” 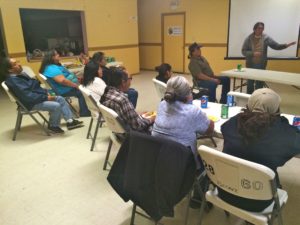 During the discussion after watching Fire and Ice and Islands of Sanctuary, activist JoAnn Armenta commented on the motives of governments and missionaries: “It is intentional and by design, to sever our bond and spiritual tie to the land,” and her husband Don Yellowman (Navajo) added: “But if people come together, do the research, and unite, they prevail. That’s what I saw in these films. We have to empower people to speak and act in common.”