Please provide your email to join the Sacred Land Defense Team. You will receive periodic email alerts to stay updated on sacred land news, and what you can do to help protect cultural landscapes and promote respect for the religious freedom of indigenous peoples.

At the Sacred Land Film Project, we realize that the challenges facing the people in Standing on Sacred Ground might leave you with a sense of hopelessness. We do not feel hopeless.

The people working on these and related issues are making progress and, through groups like Idle No More, are setting an inspiring example for all of us.

But they need your help.

Right now, the Winnemem Wintu need your active support to fight legislation that would allow Shasta Dam to be raised. This would drown many of their last remaining sacred places and traditional homelands. 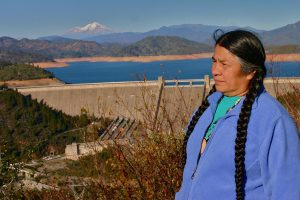 Mailed letters still carry great weight on Capitol Hill. Please write your own letter or copy the letter below, paste it onto
your own letterhead and mail to:

If you prefer to email, click here to go to Senator Feinstein website where you can also paste in the letter. Click here for a downloadable pdf of the letter and here for a Word document.

LETTER TO COPY AND PASTE TO MAIL TO SENATOR Feinstein

Re: Shasta Dam Raise and the Winnemem Wintu Tribe

Please do not authorize or fund the raising of Shasta Dam by 18.5 feet.

The dam raise would flood most of the remaining homelands of the Winnemem Wintu, people who retain strong connections to ceremonial grounds, sacred sites and ancestral villages along the McCloud River. This tribe has suffered enough from the existing dam. Their traditional way of life depends on the river and the Winnemem culture is a critical thread in the fabric of our society. Let’s not destroy this tribe for an unnecessary and expensive construction project.

Raising the dam would cost the public hundreds of millions of dollars to yield—in high-water years only—a small amount of very expensive water for a handful of beneficiaries. The Shasta reservoir rarely fills now, at the dam’s current height. There are surer, cheaper, faster alternatives, including conservation and efficiency, underground storage and recycling, to provide the needed water. This project will hurt the endangered salmon it is supposed to help. We should not use 20th century technology to address 21st century challenges.

Nor should we further enrich the Westlands Water District with taxpayer subsidized water they can sell for a profit.

Finally, McCloud River is protected under California’s Wild and Scenic Rivers Act. Further flooding of the free-flowing McCloud would violate the Act and set a dangerous precedent for all our rivers.

Here are some suggestions for what you can do to make a difference. There is hope and healing in action.