https://childventures.ca/2022/09/14/5lweloa A long history of living on the land has granted the Sámi people a rich bank of traditional ecological knowledge enabling them to maintain, protect and restore their environment’s inherent biodiversity. There are multiple cases where the Sámi have protected the biodiversity of their homeland, both through active preservation and through legal actions that have resulted in maintenance of biodiversity and the cultural traditions that protect and support the land.

https://www.kidsensetherapygroup.com/vq3d9ryz The Sámi are traditionally involved in reindeer herding, fishing and using the landscape for subsistence (Mustonen et al., 2017; Wing, 2017). In a homeland that spans northern Scandinavia and into Russia, the Sámi must negotiate with four different governments, each of which has its own laws and histories with this minority population. While most Sámi today live in towns and cities, and work non-traditional jobs, between five and ten percent or the Sámi work with reindeer and lead traditional lives, following 500 years of religious conversion, forced removal, boarding schools, language bans and discriminatory laws.

One way the Sámi have used their traditional ecological knowledge to maintain biodiversity is through their methods of cod fishing in Norway (Eythorsson, 1993). Sámi fishermen recognize the importance of preserving biodiversity at cod spawning sites. They allow cod populations to repopulate, maintaining balance at their spawning sites, and sometimes avoid spawning sites altogether to allow cod to reproduce. If they do fish at a spawning site, they purposely use nets that will not capture large fish. This enables the large cod, the ones the Sami recognize as having the greatest reproductive potential, to reproduce and maintain the spawning site (Eythorsson, 1993, p. 135-136). Danish fisherman, however, who did not have the same traditional knowledge of the land and resources, captured all sizes of cod and frequently overfished spawning grounds, sometimes resulting in the complete abandonment of the site by the cod (p. 136).

Another example of biodiversity protection is the Sámi treatment and use of the plant Angelica archangelica (commonly known as garden angelica or wild celery) in Fennoscandia . The Sámi use all parts of this plant for a variety of purposes, such as using the leaves and stalks to help preserve reindeer milk for the winter. With their knowledge of the plant, the Sámi use harvesting techniques to ensure that the plant populations are not depleted but harvested sustainably. For example, they clear away the flower bud to allow the plant to continue living, since the plants normally die after blooming. They also ensure their longevity by limiting the number of plants harvested at one time from each area (Rautio et al, 2016).

http://www.youthministrymedia.ca/z9gd541ddb The Sámi today also engage in efforts to restore and maintain biodiversity by cultivating salmon populations. The Skolt Sámi in Finland are attempting to rehabilitate salmon spawning sites in the Näätämö River. They protect the fish by using fewer seine nets and by focusing on capturing pike instead of salmon, because pike attack young salmon (Robbins, 2018).

Buy Generic Diazepam 10Mg The Sámi have also protected biodiversity by pursuing political action to protect their land. Although difficult, this is a significant way of preserving the biodiversity of an area. In 2010, the Sámi were able to successfully acquire protection for 800 square kilometers of land in Finland that had been designated as significant to reindeer herding and to the Sámi’s livelihood (Sanders, 2015). This area of land contains some of Finland’s old growth forests, which host significant biodiversity. Protecting the land preserves the old growth trees as well as the species residing therein, including endangered species. The forest had begun to be eroded through the work of the forestry company Metsähallitus, which was cutting trees for commercial use. This destruction of the land disrupted the ability of the reindeer to feed and endangered much of the natural habitat and many species in the forest (Sanders, 2015). Through protests and other means, the Sámi were able to win protection for the forested areas that are important for reindeer herding, which also protected the biodiversity of the landscape.

https://pinkcreampie.com/2urfqzyh8 More than 100 species of birds nest in the wetlands in Sjávnja nature reserve. The old growth forests house many different species of plants (lichen for reindeer, spruce, willow), animals (capercaillie) and insects. These are the largest continuous old growth forests in Sweden. On the mountain Douttar are species not found elsewhere. Reindeer herding contributes to the biodiversity of the landscape through foraging and trampling, which help control forest growth and fertilize the landscape.

https://popcultura.com.br/ddnudmn1c The establishment of this region as a UNESCO World Heritage Site affords it significant protections, both for the cultural traditions of the Sámi as well as the biodiversity of the region. One of the major factors leading to the establishment of Laponia as a World Heritage Site was the presence of the Sámi and their continued practice of reindeer herding in the area. The Swedish government guarantees the Sámi their right to reindeer herding, as well as to fishing, hunting and other traditional activities in the Laponia site. The Sámi contribute to the maintenance of the biodiversity of the land through their continued presence and use of traditional practices on the land, their contributions to management decisions of the site, and their cooperation with the monitoring and inventorying of animal species through UNESCO (Reimerson, 2013; UNESCO). 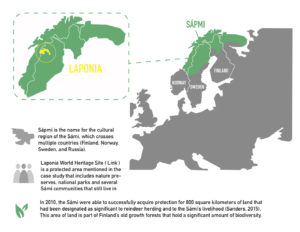 Mustonen, Kaisu, Mustonen, Tero, and Moshnikoff, Satu. (December 21, 2017). “Medicines of the Land: Sami Reflections on the Role and Use of Indigenous Medicine Today.” IntercontinentalCry, Center for World Indigenous Studies.