The Tempest Over Terry

I had the honor of screening films and guest lecturing twice with Terry Tempest Williams at her awesome “Arts, Advocacy and Landscape” class at the University of Utah. It is very sad that Terry’s fearless political work fighting tar sands and fracking in Utah, so beautifully and lovingly expressed in her speaking, teaching and writing, would cause Utah’s powers-that-be to morph into cowards-that-be and push Terry out. It’s blacklisting—and it’s shameful.

Could it be that Terry and her husband Brooke’s use of their credit card to lease BLM land near their house in Castle Valley for “alternative energy development” pissed off the people with the purse strings in Salt Lake City?

Terry was one of the founders of the Environmental Humanities graduate program at the publicly-funded University of Utah. Students enrolled in the program to experience the cutting edge of education with an inspiring teacher. In the field. On the land. Asking questions. Feeling the mystery. Writing it up. It was experiential poetry in motion.

Last fall we journeyed east of Salt Lake City into the oil fields of Vernal, Utah. A scary Rolling Stone article had drawn national attention to a rash of infant deaths and miscarriages in Vernal allegedly caused by air pollution from all the drilling, pumping, fracking and diesel truck fumes. To make matters worse the first tar sands mine in the United States was preparing to open south of Vernal. Terry asked me to show our Standing on Sacred Ground film about the tar sands of Canada in Vernal. Everyone was surprised when we got a nice front page article in the local paper, the Vernal Express, and a standing-room only crowd filled the screening room at local Utah State University. We were a little worried about who might be in the crowd until we checked the parking lot and saw that there were no pick-up trucks. Terry’s students stood with me in front of the room after the film and fielded questions for a hour, engaging the local citizens in a very thoughtful and heartfelt discussion about economic development, wilderness and community. 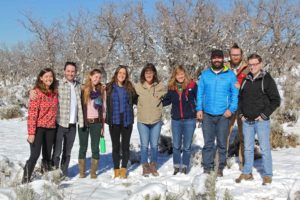 By day, we drove along the top of the magnificent Book Cliffs to the end of a brand new, 45-mile, $86 million highway that has been paved to the doorstep of US Oil Sands‘ (based in Calgary, Canada) new surface-mining operation. Snowy forests welcomed the students and visions of a ruined Alberta tortured my mind. An official meeting between the class and US Oil Sands in Vernal had been vetoed by corporate officials in Canada, but the students fearlessly marched up to the gate and started asking questions of the workers. The price of oil was already plummeting and we wondered how they could keep the project going. The workers talked about their families and how much they needed and appreciated the construction jobs. They seemed to know very little about tar sands or the new “orange peel extract solvent” that US Oil Sands claims will produce greener tar sands oil.

This will be “one of the most environmentally responsible oil projects ever built anywhere on the planet,” promises US Oil Sands’ CEO Cameron Todd in Calgary. Standing atop the Book Cliffs, looking at bulldozed soil, though, Terry’s students would have none of it. They asked a barrage of thoughtful questions. Being on the land is so profoundly different from the classroom. I could feel the extra effort the kids were making, and the depth of the experience they were having. Later, they enjoyed a snowball fight amongst a threatened piñon-juniper forest.

US Oil Sands estimates there are 180 million barrels of oil close to the surface on the land they’re leasing at PR Springs, where we witnessed the first earth moving operations. But the total estimated reserve at PR Springs is 4.4 billion barrels of oil. The other major Utah deposit—a whopping 16.2 billion barrels—is referred to by the industry as the “tar sands triangle” and it is buried just west of the boundary of Canyonlands National Park. This is the one that really scares me—and bulldozers there would have Ed Abbey rolling in his desert grave.

I am sure it has more to do with the plummeting price of oil than with Terry Tempest Williams’s fierce scholarship and radical teaching style, but tar sands mining in Utah has been put off for another day. US Oil Sands mothballed the operation in February. For now they will have to #KeepItInTheGround.

You can read about the University of Utah’s betrayal of Terry Tempest Williams here.