We need to know the truth about Native American prehistory, and indeed that of the Western Hemisphere. I personally feel that unless and until we are in some way connected with world history as early peoples . . . we will never be accorded full humanity. We cannot be primitive peoples who were suddenly discovered half a millennium ago.

Tomales Point and Point Reyes, the Farallon Islands and the West Berkeley Shellmound, all in northern California’s Bay Area, are sacred places. Their entirety forms an immense ceremonial and mortuary complex for the Coast Miwok and Ohlone, indigenous to the San Francisco Bay Area. These coastal sites are evidence of early Polynesian settlement in the Americas.

They are presently threatened with substantial damage and destruction—and they should be protected and preserved. The Farallon Islands are facing a proposal by Point Blue and the U.S. Department of the Interior’s Fish and Wildlife Service that includes a 1.5 ton Brodifacoum poison drop to kill mice on the islands. This poisoning will cause irreparable harm, with bykill spreading to the surrounding marine sanctuary and affecting massive numbers of fish, birds, other wildlife, and the food chain up and down the coast and inland. Brodifacoum is a blood thinner, causing animals ingesting it to bleed to death. The California Coastal Commission approved the poison drop on a conditional basis for fall 2023.

Tomales Point and Point Reyes are facing continued archaeological site degradation and massive environmental damage from groundwater pollution from commercial grazing leases to private ranchers. The restored native tule elk there continue to be threatened with removal and extermination to allow expanded cattle grazing. The National Park Service did not follow through on the 2008 nomination of a Coast Miwok heritage district (see footnote 1, below) at Point Reyes National Seashore to the National Register of Historic Places. Instead, in 2012, the Drakes Bay Historic and Archaeological District was approved (2). In 2015, the nomination of the Indigenous Archaeological District was withdrawn and replaced with the Historic Dairy Ranching District (3).

The West Berkeley Shellmound and Village Site was declared a historic landmark by the City of Berkeley in 2000. In 2020, the National Trust for Historic Preservation listed the West Berkeley Shellmound site as one of the eleven most endangered historic places in the United States on their annual list. Excavation and construction of a commercial and residential building are threatening the site, with an ongoing legal battle, despite the site’s cultural significance, landmark status and support by the City of Berkeley.

On the central coast of California, a megalithic archaeological site has been discovered at Tomales Point on the Point Reyes Peninsula. Structures composed of massive rocks weighing several tons are assembled there. Its features include two stone lines—together approximately 846.5 feet long and crossing the crest of the Tomales Point ridge, isolated standing stones and upright stones within the lines, raised earthen platforms, a roundhouse foundation, and a spring. Rounded boulders perched on stone piles are arranged to mimic the constellation Cassiopeia in the night sky.

Confirmation that the builders of these structures regularly visited and used the site came with the discovery of the roundhouse and platforms. The presence of this star map and many other cosmological connections between the structures suggest that the site apparently was built for regular astronomical observation and ceremonies. The west face of the largest standing stone at the site is marked by a large petroglyph of a star, further supporting the astronomical/ceremonial function hypotheses.

The oral traditions of the Coast Miwok, indigenous to this area, confirm that the site of the stone line, just off the coast, was used as Jumping-Off Place for the spirits of the dead, on their way to the Farallon Islands (4), which could be both a resting place of the spirits and a last Earth point before journeying to the Milky Way. The roundhouse, platform mounds, and other features were used in ceremonies.

Coast Miwok are related to the Ohlone, their neighbors, by language, culture and DNA. The Ohlone’s West Berkeley Shellmound has functioned for thousands of years as a similar portal for the spirits of the dead, who jump off the island of Alcatraz to fly to the Farallon Islands.

These sites are connected to other sites, including a Jumping-Off Place at Mount Saint Helena.

The Miwok and Ohlone also share “geomorphic theophanies,” which is when spirit beings, often mythic characters from Indigenous traditional stories, are felt to be alive in and mapped as landscapes. Geomorphic theophanies are common in the Americas as well as other places in the world. The San Francisco Bay Area includes Coyote, his Flea/Shrimp wife, Hummingbird, Eagle/Condor, and Pelican as geomorphic theophanies.

Jumping-Off Places like these have only been located in Polynesia (5), where they are pervasive, and along the coast of the Americas, including at Point Conception in southern California at a site honored by the Chumash and other tribes.

The presence of a Jumping-Off Place, along with other cultural, archaeological, linguistic, and genetic evidence, support that these Bay Area sites represent early Polynesian settlement in the Americas. Multiple other researchers have previously presented abundant research to support the conclusion of Polynesian contact on the Pacific Coast of what is now North and South America.

Community roundhouses were in use historically around the world and are still in use in central California and South America. Standing stones were known in California, Pacific Island cultures, India, and elsewhere. Features of the Tomales Point site and the Chumash site at Point Conception are comparable to early Polynesian ceremonial spaces.

The Farallon Islands were respected as a shelter for the spirits of the dead, a place where some reincarnated as birds, a home for Coyote, and a stopping point on spirits’ journeys to join the stars. Human remains may have been preserved in the islands’ network of caves, some now underwater, as cave burials were common in Polynesian cultures.

Early Settlement on the Pacific Coast

Linguistic research in the 1980s on the Miwok and Ohlone’s shared Penutian languages supported a hypothesis of early Pacific coastal settlement. Gruhn estimated Pacific settlement to be 35,000 years before present, with population movement fanning out inland. She based her estimate on Fladmark’s proposal for a coastal migration by boat (7). His coastal route theory became accepted in the intervening decades: “Most archaeologists now believe the first Americans traversed the Ice-Free Corridor or a Pacific Coast route, or both, during the terminal Pleistocene.” (8)

In genetics, central California was identified as a potential location for the founding event for mitochondrial (mt) DNA haplogroup B2 (B4b2), found in many Indigenous American populations below the Arctic Circle. Johnson and Lorenz concluded that samples of Sierra Miwok and Patwin mtDNA were representative of the founding haplotype proposed for mtDNA haplogroup B2 in North America (9). A Pomo, whose tribe is a neighbor to the Miwok, was later identified as being in the haplogroup founding lineage (10): “The data suggest that B2b [B4b2b] could have arisen in North California (an origin even in the north most region of the American continent cannot be disregarded.” (11)

When mtDNA locations are heat mapped (12), the spread of B2 is depicted as fanning out from its Pacific Coast origins into North America (see map below). A comparable fan for mtDNA B2 is found in South America from coastal settlement there. Very little B2 is has been located above the Arctic Circle, potentially ruling out Beringia as a migration passage. 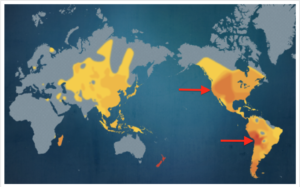 This evidence also supports early trans-Pacific route settlements on the Pacific coast of the Americas.

Initial settlement on the central California coast was earlier than current archaeological estimates allow. However, research has recently confirmed more generous dating of other early archaeological sites in the Americas than in the past. Dates are being moved further back in time. Previously unknown Australasian DNA traces have been found in Indigenous populations on the South American Pacific coast and in Amazon regions (13). Cranial morphological testing indicated comparable results (14).

Contemporary Coast Miwok lineal descendants show traces of South Indian/Australasian/Polynesian DNA in preliminary testing. Cultural traits of Coast Miwok and Ohlone are similar to those of South India, Australasia and Polynesia. Other Penutian-speaking people, like the Winnemem Wintu, whose sacred homelands are currently threatened by the proposed raising of water levels behind Shasta Dam, also share in this same heritage. The Tamil of South India have been identified as being genetically, culturally, and linguistically related to Coast Miwok and Ohlone. Like the Tamil, there are Tamal people among the Coast Miwok, and Mount Tamalpais is in Marin County, to the east and close to Tomales Point.

Early navigation and trade by boat in the Indian and Pacific oceans was common, especially among South Indians, Australasians and Polynesians. Navigation was made possible by observation and knowledge of the ocean and the stars. 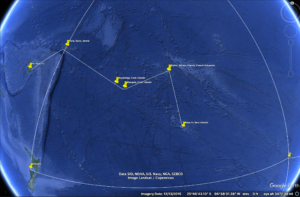 There is a known triangle of stars that maps islands of the Polynesian Triangle in the ocean. A star map of Cassiopeia was also used to map islands in western Polynesia. There is evidence that Polynesians first explored and recorded, then star mapped, and then intentionally settled these star-mapped areas. They obviously mapped the Pacific Coast of the Americas by the stars, where early coastal settlements have been found to correspond to the stars’ locations. Star maps are known to exist elsewhere in the Americas as well.

There are Indigenous oral traditions and other, prior evidence of Polynesian presence and migrations from the west. An example is the Hopi creation story in which the Third World was destroyed by flood and people came to North America in reed boats from the west (15).

The Farallon Islands correspond to the location of the North Star on Polynesian star maps. These islands were once the highest point of a large mountain range at the western edge of the continental shelf. They are the most likely landmark and landfall for early South Indian, Australasian and Polynesian settlers on the central California Coast.

These Sacred Places Need Your Help

Tomales Point and Point Reyes, the Ohlone West Berkeley Shellmound on San Francisco Bay, and the Farallon Islands are all presently threatened with substantial damage and destruction. They are sacred places, and they should be protected and preserved.

Learn What You Can Do 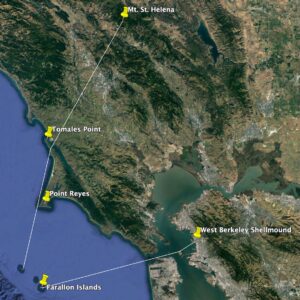 Lou-Anne (Luan) Fauteck Makes-Marks, Ph.D., is an independent researcher and activist for Indigenous American sacred lands and places. She is mixed blood by heritage, including European, Asian, Coast Miwok, Kashia Pomo, Kamchadal Aleut, Creek, Shawnee, Virginia and Maryland Algonquian, and Southeastern Sioux. She holds an MA in Consciousness Studies, an MFA in Fiber and Mixed Media Arts, and a Ph.D. in Philosophy and Religion.