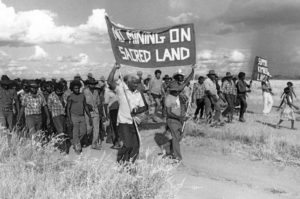 Our work at the IUCN World Conservation Congress in Honolulu kicked off on September 1. We are focusing on building a Toolkit for indigenous communities to help protect sacred natural sites and territories. This will include a “No Go Declaration” that we will write during the congress, to ban extractive industries from traditional territory. That declaration, and the supporting tools, can then be used by communities to strengthen the global network of sacred site guardians who continue to resist the aggressive intrusions of mining companies.

In the long history of struggle to create legal protections for sacred sites, there have been several success stories to build on in other locations.

In Australia, there is the “NORTHERN TERRITORY ABORIGINAL SACRED SITES ACT.”  (1989)

In the African nation of Benin, there is an “INTERMINISTERIAL ORDER — Setting the conditions for the sustainable management of sacred forests.”

In the United States, there is Executive Order No. 13007: Indian Sacred Sites, an inadequate but well-intentioned presidential order issued by President Bill Clinton in 1996.

Other important resources include:

Protect Kaho`olawe `Ohana, Cultural Use Plan for the island of Kaho`olawe —  KÜKULU KE EA A KANALOA — The Culture Plan for Kanaloa Kaho`olawe

The Convention on Biological Diversity published Akwe Kon voluntary guidelines for the conduct of cultural, environmental and social impact assessments regarding developments proposed to take place on, or which are likely to impact on, sacred sites and on lands and waters traditionally occupied or used by indigenous and the local communities.

The Sacred Land Film Project has developed a web page full of resources and Tools for Action.

How Sacred Land Protection Campaigns Have Been Won (Amazon Watch)
1. Base campaign on indigeneity (worldview, law)
2. Internationalize the campaign (travel, have partners, use social media)
3. Mobilize on the ground (defend, protest and have media present and allies)
4. Attack the corporate image (undermine PR, expose problematic practices)
5. Launch a lawsuit (expensive and time-consuming, but can be effective)

Please send us your suggestions for additional tools to include here. Send to slfp@sacredland.org — Subject line: TOOLKIT SUGGESTION. Thank you.