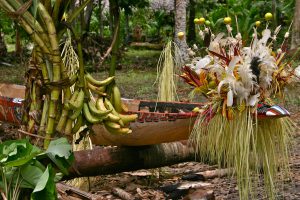 hen we filmed the canoe ceremony in Bosmun village on the Ramu River in Papua New Guinea, there was an all night debate about whether we would be allowed to film the transcendental flute players who started playing at midnight heading into the final day of the four-day ceremony. They play inside a thatched hut, hidden from sight. As the sun came up, the eerie harmonic melodies of two flutes—one male, one female—echoed through the village, and we were told: the elders’ decision was no. No filming. “Someone might die,” was the convincing reason we were given.

The Bosmun leaders admitted at the time that the flute players had to come in from a village upriver because the tradition had died out in Bosmun. Well that has now changed. We received word from PNG last week that the good feeling generated by our 2010 filming expedition led the villagers to decide the transcendental flute ceremony must not be lost, and in fact should be revived. 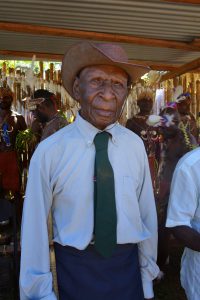 The Little Green Palai blog reports that elder Anthony Tibong, 73, the local transcendental flute master (pictured at right), taught 13 young men “in the art of making mystical music” and after two years of training Mr. Tibong graduated his students in an emotional ceremony on July 30.

“As tears rolled down his face Master Artist Anthony Tibong is happy the flutes have been given life again after nearly 60 years. He is now at peace,” reports the blog.

We are very pleased that our film Profit and Loss has been well-received in PNG and that the village of Bosmun has such a tangible—and audible—result from participating in the film.

Here is the text of the email we received this week from Rosa Koian, of Bismark Ramu Group:

Last night I returned from Bosmun with my BRG colleagues feeling more uplifted. After the canoe making rituals in 2010 for the film production some of the young men wanted to continue with these trainings and so after two years, since mid-2011, 13 men graduated on Wednesday as transcendent flutists in their community. This was their cultural practice some 60 years ago and was kept by Mr. Tibong until 3 years ago. Recognizing that the last practicing artist is now 73, they made sure he left the skills behind. In yet another moving and tearful ceremony Mr. Tibong completed his rituals from 60 years ago and graduated 13 of his students.

As you saw when you filmed it was not just the students and elders ceremony. The whole village took part with young people performing various dances.

Bosmun people once again convey their thanks to you and the film crew for realizing the richness in Papua New Guinea. 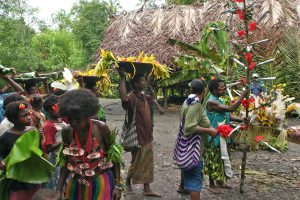 As the flutes play on, hidden inside the thatched hut, may the Ramu River continue to feed the village and run free of toxic waste from the new Ramu Nico Mine.

And once again we send our thanks to the villagers of Bosmun for entrusting us with their beautiful story, and to everyone at Bismark Ramu Group for your invaluable assistance during production and beyond. Onward!