Our boat left Maui at dawn and headed south across calm water toward Kaho‘olawe. With a group of 60 Native Hawaiians, we floated our film gear through the surf—in watertight Pelican cases—to a rocky beach. Above us loomed eroding red slopes overgrazed by goats for a century and bombed by the U.S. Navy for 50 years before determined Hawaiian activists won the island back to native control in 1994. A new era of healing has begun.

https://www.gillianhayes.com/erucu51h0jg Cameraman Andy Black, sound recordist Dave Wendlinger and I were honored last month to be a part of the Makahiki ceremony, which welcomes the season of rain to Hawai‘i. As part of the ecological and spiritual restoration of the island, the Protect Kaho‘olawe Ohana (PKO) performs the ritual every year, opening the ceremony in November and closing in February. PKO members revived Makahiki in 1982 and have conducted the ceremony every year since. At three locations on the island, offerings are presented to the revered sky god Lono, as the people chant ancient prayers of gratitude and call for rain to “regreen the island.”

https://websiteuplift.com/0y5wu4h8 I had requested permission to film the ceremony, but our colleagues in the ohana felt strongly that filming would disrupt the focus required of each individual. However, they suggested that participation in the ceremony would give me a better feeling for the life of the island, the depth of the healing needed, and the continually evolving cultural response to the needs of nature and demands of history.

https://www.artemisgalleryrichmond.com/news/3ck1igusb8 In the 30 years I’ve known and worked with the Hopi I’ve never been allowed to film a ceremony there and I’ve accepted that I never will. In our recent trip to the village of Bosmun in Papua New Guinea, the elders debated late into the night whether they would let us film the transcendental flutes at dawn. Ultimately, the decision was no filming of the flute players—too sacred, too dangerous—but audio recording was allowed. I definitely feel disappointment when a visually stunning and spiritually powerful ceremony passes before my eyes with the camera in its case, but I fully accept it and try instead to appreciate what is going on around me—and inside me.

https://www.autismcollege.com/blog/2022/07/26/lr9vj0d Small groups carefully prepared 12 different offerings, which were then presented to the mo-o-Lono priests and baked in an underground fire called an imu. Each presenter stated his or her name, where they’re from, the plant being given, and where it was grown. As the sun set we walked barefoot across lava rocks to a shrine where the chants, prayers and food for the gods were presented. As the first offerings were held up to the sky, a rainbow arced down and touched the island in the east, and a beam of light came streaming out of a dark cloud in the west. It reminded me of the full double rainbow that appeared (right) over the sacred point known as Kealaikahiki in June during our first film trip to the island.

Zolpidem Purchase Online In our collaborations with communities in sacred places around the world I have come to appreciate the important role of “rituals of generosity” in which the people give to the earth and ask for nothing in return. The good spirit, humor, focus, joy, care and commitment of the community all manifested in beautiful bundles—ho-o-kupu—created out of sweet potato, taro and other gifts of the earth, wrapped in green ti leaves and one by one set on platforms in the sky. It was a true ritual of generosity. To participate, and forget about filming, was a blessing. The rain, the gentle ocean and numerous shooting stars were clear answers to our collective prayers. The island absorbed the moisture, the love and the laughter with quiet purpose. 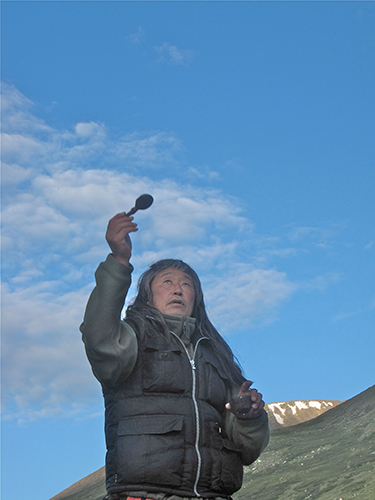 Back in Berkeley, a new moon sets over San Francisco Bay and the winter solstice approaches. It’s time for reflection on a busy year and a transition from 40 months of travel and shooting to an intensive year of editing. With Hawai‘i our final story to film (18 hours shot so far), we have begun to try to get our heads around 53 hours of tape from the Altai, 46 hours from Ethiopia, 34 hours from Peru, 42 hours from Mount Shasta, 42 hours from Papua New Guinea, 44 hours from Australia, and 50 hours from Canada. Now begins the joy and struggle of weaving our eight stories together.

Can You Buy Ambien In Mexico I spent the past week editing the wise words of our good friend Danil Mamyev (left) from the Altai Republic of Russia. On our first filming trip for Standing on Sacred Ground, Danil took us on a pilgrimage up Uch Enmek Mountain. Like the Hawaiians who watch for hoaiolona, signs from nature, Danil encouraged us to fully experience the journey by going with pure intentions, being open and listening to the land. In both Altai and Kaho‘olawe, giving energy to the land revealed signs, lessons and inner realizations that are the essence of sacred places.

https://www.gallotravelagency.us/blog/bm4yp5m0 Our time on Kaho‘olawe ended with a day of filming the Makahiki Games. The main event was wrestling, and the competition was intense in all categories—men, women and children. No matter how much dust was kicked up or how hard the loser was thrown to the ground, every battle ended with smiles, touched foreheads and a deep aloha breath. Warrior training continues in the 21st century. 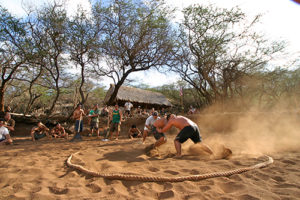