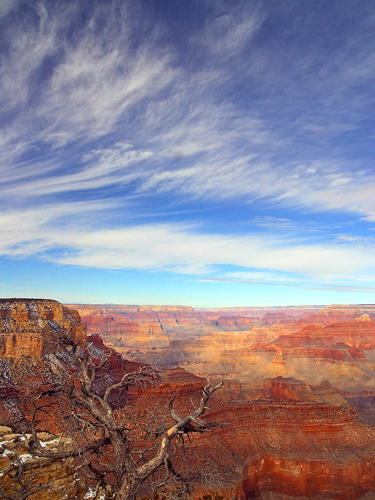 After a nearly 20-year hiatus, uranium mining has resumed on public lands surrounding the Grand Canyon.

In late December 2009, Denison Mines Corp. began extracting high-grade uranium ore from its Arizona 1 mine, located about 10 miles from the boundary for Grand Canyon National Park.

The mine had been shut down in 1992, never having produced any ore, after a crash in uranium prices. However, with a rebound in prices in recent years and increasing uranium demand — including the Obama administration’s January announcement of major investment in the construction of new nuclear reactors — mining companies are looking to restart old mines and open new ones in northern Arizona, which reportedly holds the most concentrated source of uranium in the United States.

Renewed interest in uranium mining has put Native American tribes, environmental-protection advocates and other stakeholders on alert. In July 2009, members of the Havasupai Nation and their allies gathered at the Red Butte sacred site, on the south rim of the canyon, to address the reemerging threat.

The U.S. Department of the Interior is taking a cautious approach to ensure that communities, landscapes and watersheds are protected, it says. In July, Interior Secretary Ken Salazar announced a two-year moratorium on the filing of new mining claims on the 1 million acres of federal lands near the Grand Canyon. During that time the department will consider imposing a 20-year restriction on new mine development. Also on the table is the Grand Canyon Watersheds Protection Act, introduced by Rep. Raul Grijalva (D-Ariz.) in January 2009, which would withdraw the lands from mineral exploration.

“Over the next two years, we will gather the best science and input from the public, members of Congress, tribes and stakeholders, and we will thoughtfully evaluate whether these lands should be withdrawn from new mining claims for a longer period of time,” Salazar said in a statement.

The moratorium, however, doesn’t affect existing valid mine claims, which are protected by the outdated General Mining Act of 1872. According to the Bureau of Land Management, six mines are expected to reopen on the federal lands in question.

In November 2009, the Center for Biological Diversity, the Sierra Club and the Grand Canyon Trust sued the Bureau of Land Management for failing to update 1980s-era environmental reviews and mining plans before allowing Denison to reopen the Arizona 1 mine. The groups say the current mine claim is not valid, and thus subject to the moratorium. The suit is still pending.

Of particular concern is potential impact on groundwater and regional aquifers, which supply water districts including Las Vegas and Los Angeles. As a part of the Interior Department’s two-year review, the U.S. Geological Survey conducted a series of studies to determine the effects of uranium mining on the natural resources of the region. The results, released Feb. 17, show elevated levels of uranium in wells, springs and soil around uranium exploration and mining sites.

Elsewhere in the Southwest, uranium mining threatens Native American sacred sites. New Mexico’s Mount Taylor — held holy by the Navajo, Acoma, Zuni and other tribes — sits atop a vast uranium deposit that has also attracted the attention of mining companies since the upsurge in uranium prices. In 2009, native tribes and environmental groups launched an effort to protect the mountain, which resulted in its receiving state protected status as traditional cultural property. (Read an excellent piece of long-form journalism on this complex story in High Country News.)