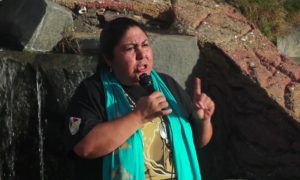 On the day after Thanksgiving—a day now oddly known as Black Friday—Lisjan Ohlone leader Corrina Gould has for the last 18 years gathered with supporters at the pathetic shellmound monument that developers of Emeryville’s Bay Street Mall erected when they paved over an ancient village and burial site and constructed what has become a massive money machine on Corrina’s ancestral site. In a painful deja vu, a similar site in Berkeley is now threatened by a 5-story condominium and retail complex at 1900 4th Street.

Here’s a short video I shot of Corrina at work on Black Friday where the Emeryville Shellmound once rose:

Some background: The Emeryville Shellmound was the largest of more than 425 shellmounds around San Francisco Bay. Ohlone people lived in a village surrounding the site for more than 2,000 years. The shellmound grew to 60 feet high and 350 feet in diameter. It was a ceremonial site and a burial ground. After settlers arrived, a large amusement park operated on the site from the 1870s through 1924. Shellmound Park included a dance hall where partyers danced on the dead with a great view of the Bay and beyond. Archaeologists extracted shells and animal and human bones and funery artifacts as local roads were paved with material from the mound (see photos of the shellmound being destroyed). Landfill and industrial development covered the site after 1924 until a 19-acre mall was built in 1999, over strong opposition by local Ohlone and allies. Many burials were disturbed, and many burials remain beneath the Bay Street Mall. 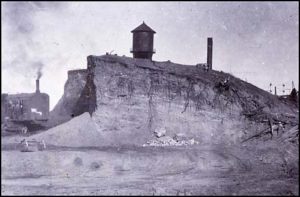 What can you do?

Read my blog with more details about the West Berkeley Shellmound fight.