Skip to content
New Film Clip: Satish Kumar on “What Is a Sacred Place?” 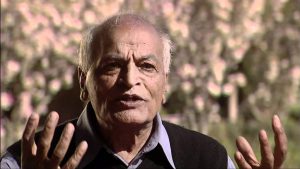 Gary Snyder warned me years ago that the Western mind naturally wants to translate “sacred site” into an either-or dichotomy: “If this is sacred then that is profane — not sacred.” The unintentional harm we might do by trying to protect sacred places could be to win the protection of a small fenced-off area while everything around it is open for desecration. “Be careful,” Gary counseled.

As we begin editing 350 hours of footage from eight sacred landscapes around the world, it is clear that indigenous cultures have myriad kinds of sacred places, and many different relationships, responsibilities, ceremonies, songs, prayers and stories. To find common themes and to draw distinctions, we have interviewed four “big thinkers” — Satish Kumar, Oren Lyons, Winona LaDuke and Barry Lopez — and we are posting some of their comments as web clips. In a world of sound bites, I see a pattern: the really profound comments take two, three, four minutes to unfold.

Satish Kumar brings a Hindu, Buddhist and Jain perspective to the definition of “sacred place.” For Satish, a UK-based writer, pilgrim and editor of Resurgence magazine, all of the Earth is the home of a divine, life-giving force so vast, mysterious and expansive that it is incomprehensible. As Satish explains it, humans embrace the Ganges River as sacred because all water is sacred, so the Ganges is a local symbol of universal sacredness. Mount Kailash is the home of the divine, a living mountain, but still essentially a symbol that all mountains have spirit and give life, as part of the sacred web of life.

In a challenge to the environmental movement, Satish says, “We have to have an ecological worldview and understand that we are part of this web of life. But sometimes in our Western, materialistic and intellectual tradition where rationalism has dominated our thinking, even ecology has become a materialistic discipline — a scientific, rational, description of our relationship with the Earth. When you are thinking in terms of Earth being an abode of the divine, you are going further than a materialistic or a rationalistic worldview of ecology, to what I call reverential ecology. What I would call even spiritual ecology. When you have reverential ecology you see trees, mountains, rivers, forests not just in the visible and material dimension, but you see that all these elements have spirit.”

We found Satish’s explanation of sacred places so compelling that we edited a three-minute piece incorporating some of our best b-roll images, asked Jon Herbst to compose a musical score, and we present it here as a teaser of things to come, to give our friends and supporters a taste of the film series we are shaping. Enjoy!